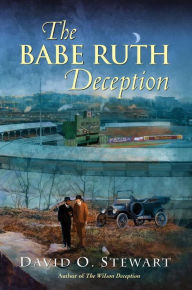 It is the summer of 1920 and baseball has been tainted by the 1919 World Series scandal in which notorious gambler Arnold Rothstein paid eight Chicago White Sox players to fix the series. The new baseball commissioner, Judge Kenesaw Mountain Landis, is on a mission to clean up the league’s reputation, and new Yankees player Babe Ruth is fearful that Landis’ investigation will uncover a large debt he owes Rothstein.

Speed Cook hires The Babe to play several off-season exhibition games, while, coincidentally Fraser’s wife Eliza, a producer, also hires Babe Ruth to star in her silent film. Soon Speed and Fraser are enlisted to help recover Babe’s note, but Babe is less than forthcoming about the debt—what he owes, why it is owed—which makes Speed’s and Fraser’s attempts at recovery difficult. Add to that a serious romantic affair between Speed’s bootlegging son and Fraser’s daughter, who was crippled in the bombing of Wall Street, and it makes for a terrific read.

The Babe Ruth Deception is an alluring low-wattage historical mystery, but the mystery is far from the story’s most appealing element. The New York City setting is nicely rendered and the social issues of the day are highlighted by the interracial affair between the protagonists’ children, the bombing of Wall Street by an anti-capitalist group, and the corrosive relationship between high-stakes gambling and baseball. Then there is The Babe, a larger-than-life character made vivid and real. This one is a baseball fan’s dream.