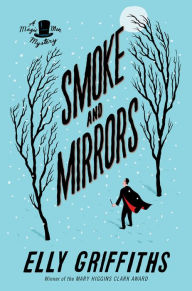 Two inseparable friends, Annie Francis and Mark Webster, 13 and 12 years old respectively, go missing just before a freak November storm covers the seaside English town of Brighton in a layer of deep snow. Some speculate the two ran away together, but Detective Inspector Edgar Stephens thinks otherwise. The children’s bodies are discovered a few days later in a ditch next to a popular walking area, a trail of candy leading to their resting place.

The year is 1951 and master magician Max Mephisto is performing in a pantomime of Aladdin in Brighton’s Palace Pier Theatre. The inspector enlists Max, who served in WWII with him, to help with the investigation. Max warns Edgar that though Annie wrote plays based on Grimm’s fairy tales and, with Mark’s help, staged them in the garage of a retired widower they called Uncle Brian, the candy trail is likely misdirection used by the killer to sidetrack the police’s inquiry. Then another of Aladdin’s cast members recalls an eerily similar murder of a child pantomime actress in the nearby town of Hastings in 1912.

Smoke and Mirrors is the second Magic Men Mystery written by Elly Griffiths. The series is named for a fictional MI5 group comprised of magicians, Max and a few others, and tasked with confusing the enemy with stagecraft during WWII. Smoke and Mirrors is a study in misdirection. The suspect list is long, and more than one of the suspects is convincing as the killer. The characters are nicely rendered, especially Max and Edgar, and the pacing is expertly achieved with an unhurried, but interesting plotline.