Books
Death of an Avid Reader 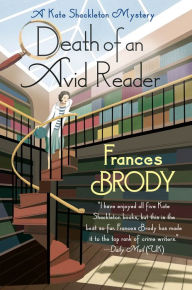 Death of an Avid Reader is Frances Brody’s sixth mystery featuring private detective Kate Shackleton. Kate inhabits England in the mid-1920s city of Leeds, where she and her partner Jim Sykes operate a detective agency. Kate’s new case beckons her to London with a letter and a check for a considerable amount to help Lady Jane Coulton find the illegitimate daughter Sophia she gave away 24 years ago.

The case takes Kate back to Leeds where she is also drawn into a murder investigation. There is a rumor of a haunting at the local lending library, and on the evening of a planned exorcism, Dr. Potter, a popular mathematician and member of the library’s board, is found dead in the library’s basement. Umberto, a sickly street performer found sheltering in the library’s basement with a small purse of gold coins in his possession, is the constabulary’s primary suspect for the murder. It is an assumption Kate disagrees with, and as clues begin to unravel, Kate discovers both the murder and her search for Sophia are connected, but in unexpected ways.

Death of an Avid Reader is a traditional British cozy. Its 1920s English setting is richly rendered, and its characterization perfectly matches both the era and the story. Imagine sleek convertibles, cloche hats, and chiffon dresses. The mystery is entertaining, if somewhat predictable, but the setting and Kate’s strong-willed and likable temperament more than compensate.