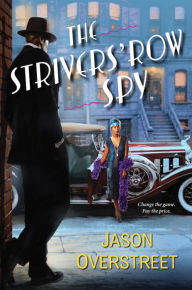 The Strivers’ Row Spy, Jason Overstreet’s first novel, is a historical thriller that is as much historical commentary as it is suspense novel. Sidney Temple, a recent graduate of Middlebury College’s class of 1919, is approached by the Bureau of Investigation (later to become the Federal Bureau of Investigation) to be its first African-American agent. He is interviewed and hired by a vividly described J. Edgar Hoover. His employment is to be kept secret, even from his wife, and his first assignment is to move to Harlem, open a business (funded by the Bureau), and become part of the community to identify the socialist, communist, or anarchist groups operating in the neighborhood.

But the true targets of the investigation are civil rights advocate W.E.B. DuBois and his NAACP organization, and Marcus Garvey, a promotor of black nationalism and a DuBois antagonist. The Bureau hired Sidney on the assumption that he is apolitical, but as an admirer of Mr. DuBois’ ideas his loyalty to the ideal of justice outweighs those to his employer, and he quickly finds himself acting as a double agent—passing sensitive information about Garvey to DuBois.

The Strivers’ Row Spy is an intriguing journey into a past that is unfamiliar to many readers. Its detail of historical events and personages is rich and informative. It captures well J. Edgar Hoover’s almost paranoid fear of communism, and the vibrancy of 1920’s Harlem at the beginning of the modern civil rights movement. Sidney Temple is, at the story’s beginning, a hesitant observer and informer on events shaping the African-American community’s role in American society. He changes from observer to participant, in a sense, from idealistic adolescent to pragmatic adult, as he is compelled to protect Mr. DuBois from both the Bureau of Investigation and Marcus Garvey. The novel’s only flaw is, at times, a plodding pace weighed down by heavy historical detail, but this is forgivable, since more times than not, it is this same detail that gives the narrative much of its appeal.