"Nothing is more infallibly indicative of bad morals than bad champagne." 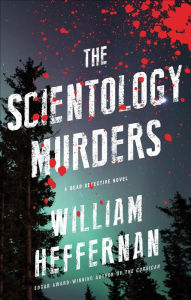 William Heffernan’s The Scientology Murders isn’t friendly towards the secretive organization, and it’s not even a mystery since we find out whodunit on page 42. So, no, this religious thriller doesn’t offer many surprises. What it does offer is an admittedly fictional look inside Scientology’s bureaucracy. In this case, the power structure is attempting to keep a serial killer (a Scientologist) from being brought to justice because he is more useful to the organization on the loose than he would be locked away in prison. When young Mary Kate O’Connell, a retired policeman’s daughter, joins Scientology, she is ordered to cut all ties with her family. And when she is suspected of being a lesbian—homosexuality being anathema to the church—she is ordered into “auditing” on a Sea Org ship. Mary Kate eventually winds up dead at the hands of Scientology’s pet serial killer (remember, this is fiction). That’s when Harry Doyle, a friend of Mary Kate’s father, enters the case. Doyle is known as the Dead Detective because when he was a child, his psychotic mother tried to kill him—and succeeded. He was brought back to life by an EMT, but his younger brother wasn’t as lucky. Doyle’s escape from death has changed him, however; he can now talk to the dead, and they talk back. Scientologists will no doubt be offended by this book (just as some Catholics were offended by Dan Brown’s The Da Vinci Code), but many readers will enjoy the peek inside the organization’s hierarchy. Also enjoyable is the spirited romance between Doyle and Vicky Stanopolis, his partner in more ways than one. And the surprise ending is a wowser. I’d tell you more, but that would spoil the one secret The Scientology Murders manages to withhold until the final pages.

"There’s nothing wrong with Southern California that a rise in the ocean level wouldn’t cure."