“The criminal is the creative artist; the detective only the critic.”

—Valentin, “The Blue Cross,“ The Innocence of Father Brown, 1911, by G.K. Chesterton 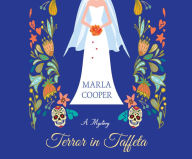 Though I don’t mind the occasional poisoned cookie caper, I’m not an avid fan of occupational cozies. So I had to be cajoled into sampling Marla Cooper’s debut yarn about Kelsey McKenna, a hapless San Francisco wedding planner tasked with guiding a destination nuptial in San Miguel de Allende. As adaptable and capable as she is, Kelsey gets stuck with a murdered bridesmaid, an innocent but imprisoned sister of the bride, a priest who may not be what he seems, a semi-boyfriend who may not be what he seems (it’s hard to avoid spoilers), several brain-dead Mexican policemen, and, worst of all, a mother-of-the-bride who is as supercilious as she is demanding. The book has the funniest dialogue this side of TV’s iZombie, thanks in part to Kelsey’s snark, not to mention the equally snarky ripostes from her sidekick, a gay wedding photographer. Happily, reader Romy Nordlinger is able to capture every nuance of narrator Kelsey’s shifting attitudes. All in all, a very engaging package that has me eager to check out Kelsey’s next caper, Dying on the Vine, in 2017.

"I'm never going to take you to a party again, Susan," Alex Tabor said, "if you're going to go around killing the guests."