Short Stories
In Sunlight or in Shadow 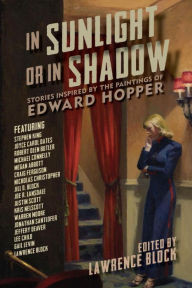 In Sunlight or in Shadow is an eclectic anthology of short fiction inspired by paintings of the artist Edward Hopper. The idea, as Lawrence Block explains in his foreword, is that Edward Hopper’s paintings represent “a moment in time, arrayed on a canvas; there’s clearly a past and a future, but it’s our task to find it for ourselves.” And each author included in the anthology uncovers that story—or perhaps, a story—of the painting they chose for inspiration. The result is a mixed lot of crime, historical, mystery, and biographical stories. The writers are as varied as the stories. They range from genre kings like Lee Child, Stephen King, and Michael Connelly to a comedian, Craig Ferguson, and an art historian, Gail Levin. Megan Abbott’s excellent “Girlie Show” is as much literature as it is crime. Pauline’s marriage to a burned-out painter unexpectedly turns positive when her husband begins painting again and asks her, just as he did when they were first married, to pose for him. Included are a few nicely placed twists and an ending that is perfectly ironic. Joe R. Lansdale’s “The Projectionist” is straight crime—the catalyst is a gang extorting a movie theater owner—that uses an innocently naïve protagonist and a little subterfuge to both surprise and satisfy the reader. Lee Child contributes a subtle, clever tale with his story “The Truth About the Matter,” about a security man for the Manhattan Project, the secret World War Two atomic bomb program, who is playing a different role than one might expect. The volume includes an additional 14 tales, each different from the others and mostly very good. Each is accompanied by the painting that provided the writer’s inspiration.