"I think perhaps all of us go a little crazy at times." 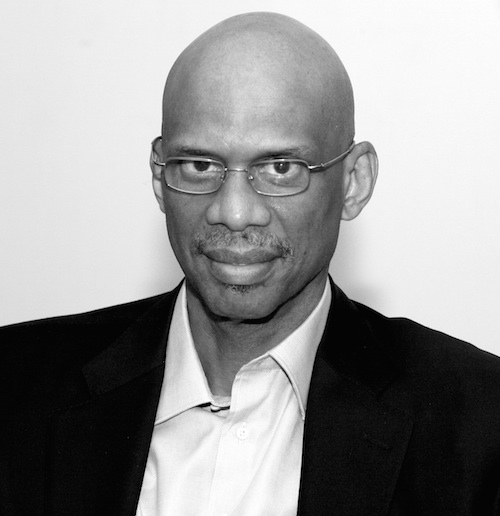 "The love affair began my rookie year... when I was given a set of [Sherlock] stories for my first road trip. I read them on the bus, and I was hooked."

Kareem Abdul-Jabbar’s name is synonymous with NBA basketball. He is a true global icon whose style changed the game, and who is famous for his indefensible skyhook and who remains the NBA’s all-time leading scorer with 38,387 points. But the six-time NBA MVP is also an ardent activist for education, a documentarian, and an author. His books include historical works such as On the Shoulders of Giants: My Journey Through the Harlem Renaissance and Black Profiles in Courage: A Legacy of African-American Achievement, as well as two autobiographies, and three children's stories. This September, Abdul-Jabbar ventures into genre fiction with the debut of Mycroft Holmes (Titan, 2015), coauthored with scriptwriter and producer Anna Waterhouse. It is the first of an intended series to feature the other Holmes, Sherlock's big brother. Mystery Scene caught up with the NBA legend to discuss his foray into fiction and his lifelong love of all things Sherlock.

Oline Cogdill for Mystery Scene: Everyone knows you from your time on the court with the Milwaukee Bucks and Los Angeles Lakers, but not everyone knows that you've also written ten books and several articles and essays over the years...

Kareem Abdul-Jabbar: Yes, I fell in love with writing—journalism first—as a teenager. I took part in a summer program in Harlem called HARYOU (Harlem Youth Opportunities Unlimited) where we interviewed locals and wrote up stories for our paper. In college, my major was history, with a minor in English. 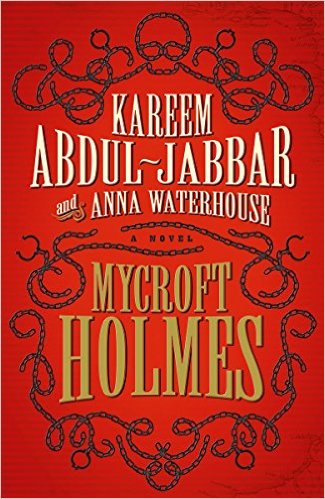 MS: You've been a busy author, but until now, no fiction. How did the Mycroft Holmes project come about?

KAJ: I’ve written nonfiction books, essays (for Time magazine), and children’s stories. Fiction is the final frontier... I liked the [Sherlock] movies and TV shows, especially Jeremy Brett as Sherlock. But the love affair really began my rookie year with the Milwaukee Bucks, when I was given a set of stories for my first road trip. I read them on the bus, and I was hooked... I liked how [Sherlock's] mind worked. I liked the fact that nothing he saw, heard or read was wasted.

MS: Unlike so much of Holmesian pastiche, your new book is centered not on Sherlock, but Mycroft, his brother. How did that love for Sherlock bring you to Mycroft, the older, less famous Holmes sibling?

MS: Does the fact that Mycroft works for the government—unlike Sherlock who is free to take any case—make it harder or easier in terms of creating plot and character? 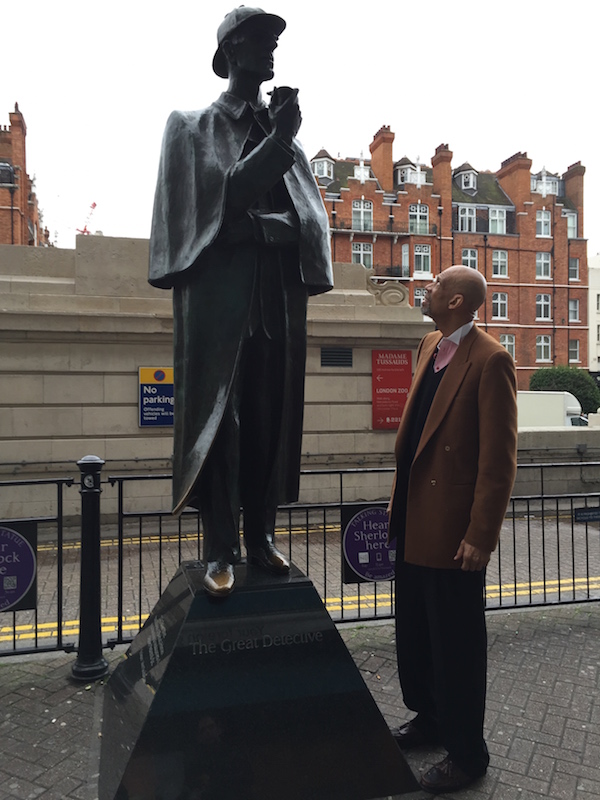 KAJ: I don’t know if it’s harder or easier, but it’s certainly different. [Coauthor Anna Waterhouse and I] were more concerned with big world events rather than solving a single crime. So in that sense, there might be more moving parts. There was certainly a good deal of research.

MS: You include a lot of details about life in the 19th century. The book starts with an 1870 Oxford-Cambridge boat race. How did you research that time and life?

KAJ: Well, that is all research, isn’t it? I’m not sure there’s a trick to it, other than digging in and doing the work. As you learn details, you add them, trying to make them sound like a natural part of the story. Sometimes the details enhance, sometimes they actually change the movement of the story. We tried to keep as closely to the truth as we could. In the Cambridge-Oxford race, for example, it was the first time Cambridge had won in some years. The names of the crew are the real names and positions of the crew.

MS: And some of the action takes place in Trinidad. How did you research that region?

KAJ: As before, it was research and more research. The Harmonious Fists [from Mycroft Holmes] are based on an actual group of Chinese martial artists, and the Merikens (ex-American slaves who fought on the side of the British) are certainly real.

MS: Your character, Cyrus Douglas is from Trinidad, and is a little like Mycroft’s version of Watson. He is also a first—a central black character in the world of Sherlock Holmes. Where did Douglas come from?

KAJ: I knew I wanted a story that was partly set in Trinidad, because I have ties there. I also knew that it, and Jamaica, were busy places of trade. That led to my character Cyrus Douglas and his occupation.

But truthfully, I don’t know [where he came from]. It’s not simply because, as a black man, I relate to and want to create black characters—a black character didn’t necessarily have to fit into the story. But Cyrus Douglas was born fully formed.

My co-writer and I knew who he was from the first. We knew he’d have to be able to keep up with Mycroft, and we knew he would have to be the moral center [of the books]. That had to come from a real, rather than a manufactured, place. Making him black gave him several disadvantages in that era that worked for his overall strength of character in terms of what he’d endured and survived.

...Then [Anna and I] had to figure out how a white man would become ‘best friends’ with a black man in that era, and how his very white fiancée could also have ties to Trinidad.

MS: You and Anna Waterhouse worked together on the documentary film On the Shoulders of Giants (2012, Netflix and Showtime). But a documentary film project is a totally different creature than fiction writing. How did the collaboration work for this novel? I understand Anna does more of the dialogue and you are more about the story?

KAJ: Anna wasn’t acquainted with Mycroft Holmes. She didn’t know much about Trinidad. She does now.

She’s meticulous about research. And yes, she writes dialogue in a way that I can’t, or maybe don’t. But it’s hard to parse it out like, “I do this, she does that.” We discuss ideas. We bat around story concepts. We pass a chapter back and forth several times before we’re ready to go on. But it’s not like we can go back and say, “I put that comma there.” Mostly, it’s a question of trust and taste. I trust her taste, she trusts mine. We found that out on the documentary. We keep going until we both think it’s better than good enough.

MS: Cyrus is as intelligent as Mycroft, but perhaps, as you point out, more ethical. If there is a sequel, will we see more of him?

KAJ: He is part and parcel of Mycroft’s life. The question is, for how long? Because, of course, Mycroft ends up a curmudgeonly recluse.

MS: Speaking of Mycroft's relationships, what aspects of Mycroft and Sherlock do you hope to show in your book?

KAJ: Their rather prickly relationship and why it becomes so. They’re really at cross-purposes, in a sense. If Mycroft does his job well, crime overall decreases. That’s death for Sherlock. 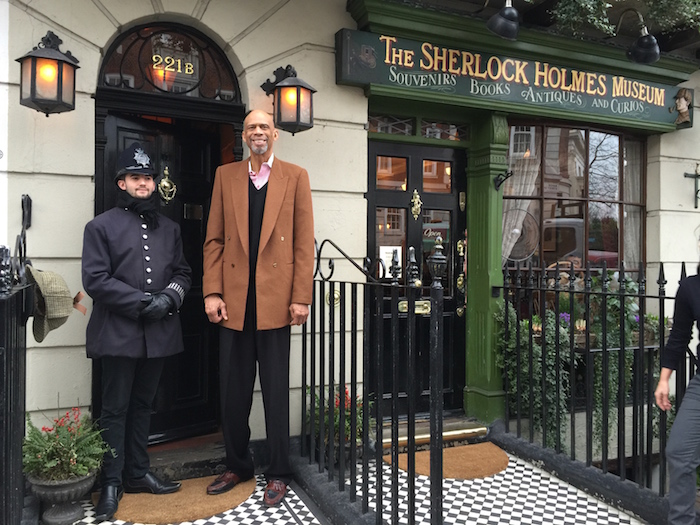 Kareem Abdul-Jabbar and a constable outside 221B Baker Street in London.

MS: Are you a member of Baker Street Irregulars?

KAJ: No. Or possibly, not yet.

MS: Do you read crime fiction?

KAJ: Walter Mosely is right up there. I have read everything written by Raymond Chandler, and all of the Spencer novels by Robert B. Parker. In my opinion, Raymond Chandler and Dashiell Hammett define the genre of modern crime fiction. I think Parker, Walter Mosley, Elmore Leonard, and Martin Cruz Smith have all made admirable contributions and they are some of my favorite reads.

KAJ: One quick story: During a game, I heard the ball boys gossiping that a rival player and his coach were sneaking smokes during the breaks. So when the game resumed, I just ran that guy all over the court. As I figured, he couldn’t keep up, he didn’t have the wind.

We ended up winning that game.

Kareem Abdul-Jabbar is a Sherlockian with ten books to his name, including children's stories, two autobiographies, and several historical works. Mycroft Holmes, coauthored with Anna Waterhouse, is his first mystery novel. Some also know him as the NBA's all-time leading scorer, and a Basketball Hall of Fame inductee.

“Nobody called, nobody came in, nothing happened. Nobody cared if I died or went to El Paso.”