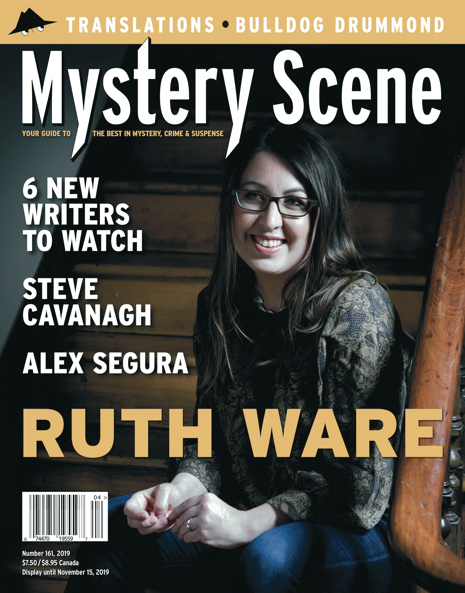 Ruth Ware says working in publishing was a wake-up call for an aspiring writer.

I think it’s easy, as a punter, to walk into a library or a bookstore and see the huge number of books published and think, “There must be space for me.” However when you work in the industry you realize this is the tip of the iceberg in terms of the huge number of excellent books that don’t quite make that fin al fence for whatever reason—or do get published and don’t get the attention they deserve.

Ware has definitely caught the attention of readers with such bestselling novels as The Woman in Cabin 10 and The Death of Mrs. Westaway. Now with her new novel, The Turn of the Key, she provides a idiosyncratic updating of Henry James’ The Turn of the Screw. John B. Valeri talks with Ware in this issue.

Between the end of World War I and the start of World War II, no fictional detective was more visible than Captain Hugh “Bulldog” Drummond. In 10 novels and 24 films, Drummond is a likably over-the-top hero who mixes “I say, old bean” British gentility with wild derring-do in stories that remain entertaining to this day. Michael Mallory profiles this winning character.

In a new annual feature, Oline Cogdill takes a look at terrific current books from six up-and-coming writers. Her criteria? “Stories that involves us, characters we want to spend time with, and dialogue that crackles.”

Several years ago, on the other side of the Atlantic, one of Northern Ireland’s top em ployment and civil rights lawyers was cross-examining a witness and got him to admit on the stand that he was lying—in front of the judge and everyone else. “Eddie Flynn came to me in that moment in court,” says Steve Cavanagh. Now Cavanagh is back with the much-buzzed about Thirteen. In it, the serial killer is not on trial—he’s on the jury. Craig Sisterson gets the scoop in this issue.

Stieg Larsson’s Millennium Trilogy helped power the ongoing Scandi-crime wave and a growing appetite for translated mystery fiction in general. Yet, the hidden figures who shepherd tales across language barriers have been largely overlooked: the translators themselves. In his overview, Craig Sisterson talks to several translators about taking a story from one language to another.

Sixty-five years ago one of the mystery world’s most popular authors, Stuart Palmer, creator of Hildegard Withers, met Groucho Marx on the set of the You Bet Your Life quiz show. Arthur Vidro takes a look back at the amusing television episode.

In this issue Alex Segura tells John B. Valeri his hardcore writing philosophy: “You have to create these characters with care— give them weight, heft, and meaning, and then have no fear when the grim reaper appears. You have to be willing to take them off the board if the plot demands it.” Readers don’t always know what to expect with Segura— except that they’ll be fully entertained.

Also in this issue, we have interesting My Book essays contributed by Elizabeth Zelvin, Daniella Bernett, Kathleen Ernst, and Sarah Wisseman.

In the last issue we told you about the new Mystery Scene Forum now available at our website. Please drop by and say hello, then leave a comment or question for us. We’d love to hear from you and think this extra way of staying in touch offers benefits to all of us. Plus, it’s fun—bring your best jokes, quotes, and anecdotes!

“I was born when she kissed me. I died when she left me. I lived a few weeks while she loved me.”

—Dixon Steele (Humphrey Bogart), In a Lonely Place, 1950, screenplay by Edmund H. North and Andrew Solt based on novel by Dorothy B. Hughes

MysteryScene The Family Upstairs by @lisajewelluk offers all the suspense a reader could want—and also serves as a cautionary ta… https://t.co/jqmLmQOZxe
12m • reply • retweet • favorite

MysteryScene In The Second Sleep, @Robert___Harris gives us a dystopian post- technological world where the Church is the law an… https://t.co/rNIzCWOUJ5
24m • reply • retweet • favorite

MysteryScene RT @donwinslow: Very excited about the news today. My novel The Force is moving forward as a film from Fox/Disney with MATT DAMON starrin…
Jan 23 • reply • retweet • favorite