Rizzoli & Isles: an Intelligent Crime Drama
Oline Cogdill
Fans of Tess Gerritsen’s novels will find much to like in the new TNT series Rizzoli & Isles, based on the author’s long-running series. 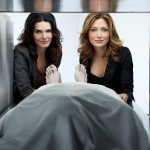 But even those who have never heard of Gerritsen’s novels about Boston police detective Jane Rizzoli and medical examiner Maura Isles will find much to like in this gripping, well-plotted and intelligent crime drama.

Unlike most of the crime dramas on TNT that rely on the characters’ eccentricities to add texture to the plots, Rizzoli & Isles is a straight-ahead, serious cop show.

The focus here is on the crime detection that springs from the working relationship between the cops and the medical examiner’s office. Rizzoli & Isles sparingly uses humor, springing from the characters’ witty and smart conversations.

Rizzoli & Isles is an adult crime drama that is more like Law & Order – without the endless reruns.

The first two episodes I screened feature well-devised plots that are realistic and intriguing. Some scenes are a bit graphic, but actually are quite tame when compared with some of the current network crime shows such as the CSI’s, Criminal Minds and the Law & Order franchise.

And the analogy to Law & Order has some merit. Rizzoli is played by Angie Harmon, who played Law & Order’s assistant district attorney Abbie Carmichael from 1998-2001 and was, for my money, the best ADA the show ever had. Harmon is an intelligent actress who always brings a degree of sophistication to her roles. Those high standards continue in her role as the independent Rizzoli.

Sasha Alexander also brings a sense of refinement to her role as Isles. Alexander is best known for her role as Special Agent Caitlin “Kate” Todd in the first two seasons of the drama NCIS.  She also was a regular on Dawson’s Creek, Presidio Med and The Nine.

The friendship and respect that Rizzoli and Isles have for each other will be a major part of the series, as it is in the novels.

The two women are the ying and yang – Rizzoli with her close-knit Italian roots and Isles with her blue-blood background. Isles is always impeccably dressed while Rizzoli is more comfortable in torn jeans and isn’t bothered by a dirty shirt. Both women are intelligent and know the value of deep friendships. Their respect for each other won’t preclude them from having disagreements.

Here’s hoping that Rizzoli & Isles runs for years; and that it draws new readers to Gerritsen’s novels.