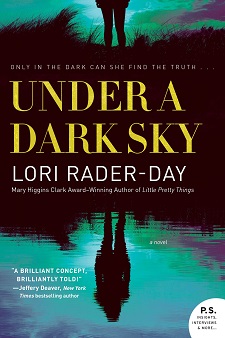 I sometimes joke that everything I’ve learned since college is because I read mysteries. I will use that sentence time and again as mysteries teach me something I didn’t know.

The latest addition to my education is a dark sky park, which Lori Rader-Day utilizes so well in her latest Under a Dark Sky.

I had never heard of a dark sky park before.

For those, such as myself, unfamiliar with this, a dark sky park is where light is kept to an absolute minimum so that stargazers can enjoy the delights of the night sky without light pollution.

What a cool way to be one with nature.

It also makes for a terrific setting for a mystery about a woman who suffers from an extreme fear of the dark that has heightened since her husband’s death. In sorting through his papers, she finds that he had booked a week at a dark sky park for their 10th anniversary. It’s an odd gift indeed, but also the push the grieving widow needs.

Rader-Day has invented the Straits Point International Dark Sky Park in Michigan as the setting for her novel. The beauty of the dark sky that she shows is what can be enjoyed at dozens of similar nocturnal environments at recreation areas throughout the world.

Under a Dark Sky delivers a shrewd plot that moves briskly to a logical conclusion. The darkness of the park also is a sharp metaphor for the emotions and secrets of the realistic characters.

By the way, Rader-Day has proven herself a strong author with plots that draw you in and believable characters. No wonder she has won several awards. Her debut mystery, The Black Hour, won the 2015 Anthony Award for Best First Novel and was a finalist for the 2015 Mary Higgins Clark Award. Her second novel, Little Pretty Things, won the 2016 Mary Higgins Clark Award and was a nominee for the Anthony Award for Best Paperback Original.

Her novel The Day I Died is nominated for an Anthony Award in the paperback original category for Bouchercon 2018, which will be September 6 through 9 in St. Petersburg, Florida.

Information about other dark sky parks around the world can be accessed at www.darksky.org, which also gives a list of other such parks.

And I have one suggestion for those wanting to visit a dark sky park—take a copy of Lori Rader-Day’s Under a Dark Sky. The novel will enhance your visit.