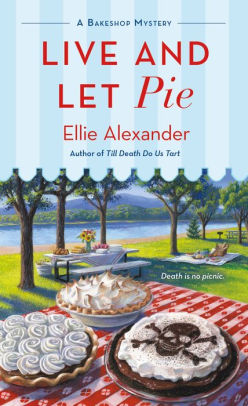 Live and Let Pie is the ninth outing in Ellie Alexander’s series set in charming Ashland, Oregon, where Juliet “Jules” Capshaw and her recently remarried mother run Torte, a bakeshop. Jules has the quaint idea that everyone should just get along, but small-town politics and relationships don’t always run true, and one day two girls out for a swim discover a human skull in the lake, and soon after an old curmudgeon named Edgar is found murdered.

While out delivering bread and pastries, Jules learns of Edgar’s choice piece of property in the center of the quickly developing town, the apparent motive for the murder. The homeless shelter wants to relocate there and there’s also a scheme for affordable service-worker housing, always a contentious concept in an upscale town. Another interested party wants to construct trendy tiny houses while the B&B next door plans on expanding their parking lot. Emotions run high, particularly those, it seems, of the passionate young advocate for the homeless, Gretchen.

Jules is only able to crack the case by exploring Edgar’s past and connecting the dots between the skull found in the lake and his murder. She interviews the town’s longtime residents, uncovering hidden skills and passions. Other ingredients to the crime’s solution include her relationship to her mother and new stepfather and her busy bakeshop and the result rises to become a truly mouthwatering experience.