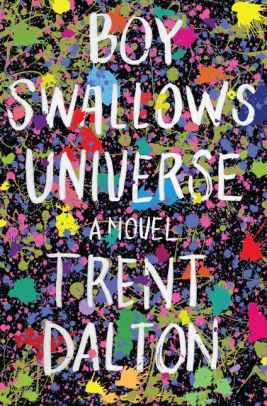 Australian journalist Trent Dalton’s debut novel, Boy Swallows Universe, is a marvelous coming-of-age novel with a confused and (mostly) reliable narrator. Eli Bell is 12 years old and growing up without much supervision in an unsavory suburb of Brisbane, Australia, in the 1980s. His life is less than wonderful. His mom is in prison, his stepdad is a small-time heroin dealer, his father is an anxiety-ridden alcoholic, and his older brother—and Eli’s only real friend—is a genius who prefers to “finger-write” cryptic messages in the air rather than talk.

Eli’s primary adult presence is an elderly crook called Slim. An escape artist, Slim holds the national record for prison breaks. He insists Eli can handle the “hard” stories since he has “an adult mind in a child’s body.” And the hard stories are prison tales: rapes and drugs and beatings. He teaches Eli the finer points of life and crime.

Eli breaks into the prison where his mother is jailed to wish her a Happy Christmas, but he is mostly good, and as he grows, his dreams do, too. In his late teens, Eli fakes his way into a journalism internship that puts him at odds with Brisbane’s most successful drug dealer, Tytus Broz.

Boy Swallows Universe is a dark and disturbing novel made palatable with humor and genuine characters. Eli is rambunctious and often trouble-making, or at least in trouble, but his heart is pure and he sees the world with a rare clarity. The grim setting is offset by Eli’s ability to find humor in his less-than-ideal life.

Dalton presents his narrative in an episodic fashion, starting when Eli is 12 and ending when he’s 19. Boy Swallows Universe is beautiful and ugly, uncomfortable and poignant. At its center, it is the story of a young boy starting life in a dead-end town and a miserable family, but striving to build something for himself in this great, grand universe.