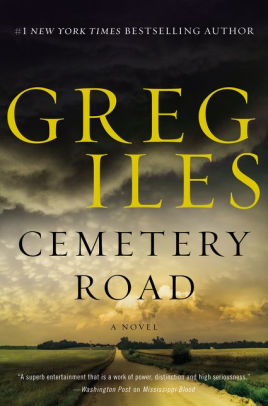 Immersing oneself in a Greg Iles thriller is like reconnecting with an old friend with wonderful tales to tell. In his latest, Cemetery Road, Washington, DC, journalist Marshall McEwan, a celebrated Pulitzer Prize winner and the darling of the cable news networks, has returned to his hometown of Bienville, Mississippi, situated on the banks of the Mississippi River. He swore he’d never return when he left at 18, but his father, who blames him for his brother’s death, is in the final stages of Parkinson’s and alcoholism, and his mother is finding it difficult to keep the family newspaper afloat. He tries hard to do what’s right, but as he says, “…it’s not easy to be good.” And now he’s about to be tested even further.

Bienville, which is run by a ruthless cabal of mostly older white men called the Poker Club, is experiencing an economic resurgence; a Chinese company is planning to build a billion-dollar paper plant in their community. But when amateur archeologist Buck Ferris finds ancient artifacts while digging on the plant site and is murdered—indigenous remains would mean a construction delay—Marshall sets out to find the killer. He enlists the aid of his childhood sweetheart, the exotic Jet Matheson. He and Jet have revived their love affair; problem is, she’s married to his childhood friend Paul, who suffers with PTSD and whose father is a member of the Poker Club. As they dig deeper into the murder, they find that the Poker Club will do literally anything to see that Buck’s murder is classified an accident and that nothing stops the construction of the paper plant—or the lining of their pockets.

New York Times bestselling author Iles likes to write long books—this one runs close to 600 pages—but it doesn’t feel overlong. Filled with murder, dysfunctional family dynamics, long-buried secrets, betrayal, and lots of sex, Iles gives his readers a sense of small-town life in the Deep South. And begs the question: Does everyone have a price?

MysteryScene RT @ScozzariFrank: You can always fix bad pages. You can’t fix no pages. So write. Just write. Try to turn off that voice of doom that para…
18m • reply • retweet • favorite