Books
The Last Woman in the Forest 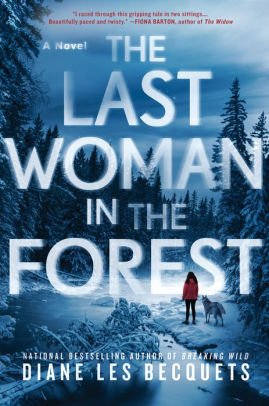 Diane Les Becquets’ psychological thriller The Last Woman in the Forest is filled with beautiful imagery of a wilderness few will ever experience in real life. Twenty-six-year-old Marian Engström, a recent graduate of the University of Michigan, has been offered her dream job as a field technician in a research program in northern Alberta, Canada. As an orienteer, she will gather specimens while working with a dog-handler team. Although she prefers the well-trained rescue dogs to the humans, she’s happy to be mentored by team leader Tate Mathias. Marian finds their mentorship turning into attraction, and soon Tate is lover, confidante, her everything. But has Marian trusted the wrong person?

After Tate dies in a bear attack, Marian begins to remember odd things he boasted about, like finding one of the four murder victims in one of Edmonton’s most infamous crimes, the Stillwater murders. After meeting his sister, she discovers he told even more lies. Who was this man she desperately loved? Unable to reconcile her memories with reality, she contacts Nick Shepherd, a retired profiler who worked the still-unsolved Stillwater cases. If she can only verify her boyfriend’s Stillwell story, maybe she can move forward with her own life.

Deft characterizations all around of Marian, Tate, and profiler Nick Shepherd and his wife Cate help build tension and empathy. The many details of a conservationist’s life and the way rescue dogs can help endangered species are fascinating. But make no mistake—woven throughout the plot is a powerful story of betrayal, as woman after woman is drawn into the path of a charismatic killer with no conscience and no mercy.