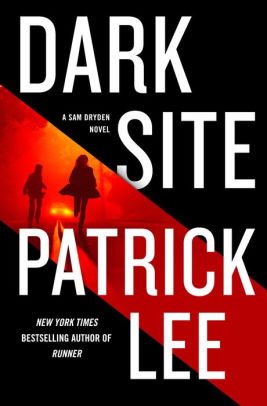 The latest in the Sam Dryden series finds Dryden, a former Special Forces operative, being hunted down for reasons he can’t explain. He does learn that someone named Danica Ellis has also been targeted by the same people, and after tracking her down, the two of them attempt to piece together their connection in the hopes of learning why someone might wish them harm. The only evidence they have is a heavily redacted document.

From here, readers are thrown back and forth between the present, where Ellis and Dryden are fighting for their lives, and the year 1989 when Ellis and Dryden are kids. We learn that the two did once know each other— when they were childhood friends living on a military base together.

Dark Site is a suspenseful, action-fueled adventure filled with big mysteries and adrenaline-pumping sequences. Patrick Lee grabs the attention of the reader from the early pages of the novel. Dryden is a convincing protagonist and Ellis is just as formidable. Lee has taken the two characters and put them on the same footing, which allows the reader to become invested in their relationship and Ellis’ backstory.

The novel is engrossing, and Lee spends enough time guiding the reader into the world so that these characters feel like real people as opposed to action heroes. This is especially true as we cut back to 1989 where Ellis and Dryden are coming of age together. Come for the thrills, stay for the rapport of the leads.