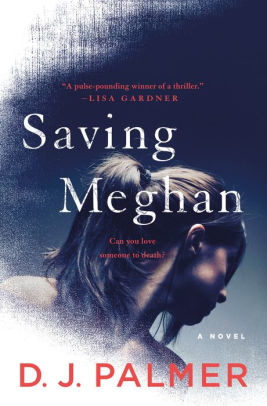 Poor Meghan Gerard. The teenager is wracked by confounding symptoms. Suffering from fatigue, muscle weakness, blinding headaches, she sometimes doubles over, collapsing in agonizing pain. No wonder the girl is in and out of doctor’s offices, and the ER, or that all the medical tests she’s been subjected to have given her a serious fear of needles. And no wonder her mother, Becky, is completely devoted to finding out what it is that ails her.

D.J. Palmer’s Saving Meghan is a riveting, well-written page-turner that is equal parts medical and domestic thriller. Deftly plotted, and told from a handful of perspectives, it opens to find Becky taking a seat on a plane headed from Boston to California to visit her mother in hospice care. Conflicted about how she should feel about the woman who was such a damaging influence on her life, Becky feels no such ambivalence when it comes to her own daughter. As the plane is readying for takeoff Becky answers a phone call; Meghan has just been rushed to a local hospital. Becky demands to disembark. When the flight attendants won’t oblige, Becky pitches a fit. Her histrionics lead to an encounter with an air marshal. Led off in handcuffs, she winds up making the evening news.

As this crafty novel reveals, Becky isn’t the most trustworthy of protagonists. Having grown up with a conniving mother who faked illnesses in order to receive disability checks, Becky is herself quite the manipulator.

Meghan, meantime, is dealing with being in the middle of an emotional tug-of-war between her mother and father, Carl, as well as with an army of physicians. Dr. Zachary Fisher specializes in mitochondrial disease—metabolic disorders that lead to neuromuscular disease. Perhaps he can find out what’s wrong with Meghan? Other medical experts enter the picture. One of them winds up dead.

Becky is questioned by the police.

A striking beauty who looks a decade younger than her 48 years, the woman is adept at using her charms to get what she wants. Where her daughter’s care is concerned, she’s not above making veiled threats to those with whom she clashes. She unleashes her anger when it’s suggested that Meghan’s health issues might be psychosomatic. Is Becky guilty of what’s known as Munchausen syndrome by proxy?

Characters and relationships evolve. There are twists and just the right combination of suspense and medical data. Author Palmer knows his way around the latter. He previously teamed for a handful of titles with his father, Michael Palmer, a physician who turned out stacks of medical thrillers, including Extreme Measures (which became a film of the same title). The senior Palmer, who passed away in 2013, has left us in skilled hands.