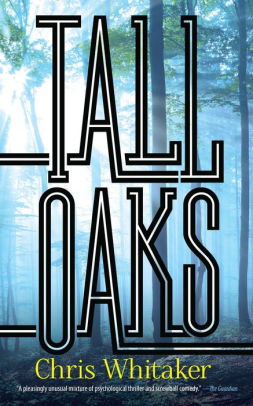 Tall Oaks, California, is a small town with big secrets in Chris Whitaker’s debut psychological thriller of the same name. Tall Oaks starts when Harry, the three-year-old son of Jessica and Michael Monroe, is snatched from his ground-floor bedroom in the middle of the night. Jessica has been watching Harry on a baby monitor when he disappears from the screen. The heart-stopping factor of her ordeal is compounded by what she says was a whispering man in a rocking chair wearing a clown mask. But this isn’t really a tale about coulrophobia (fear of clowns), as chilling as that is. Instead, the author focuses on Jessica’s nonstop search for her son and the town “full of oddballs” that she suspects. Jessica is helped in her investigation by the town’s sheriff, Sgt. Jim Young, who believes that “someone knows something” and who is burdened by the guilt that he can’t keep his town safe. Those someones include just about every quirky character in Tall Oaks with their idiosyncrasies and hidden lives.

There’s teenager Manny Romero who fashions himself an incipient gangster. Despite the summer heat, he wears a heavy woolen three-piece suit, black wingtips, and a fedora. He is accompanied by his loyal sidekick and consigliere, Abel Goldenblatt, and their shenanigans as they pursue dates for the prom add humor to an otherwise dark novel. Then there is French John, a gay cake baker, who is creating a wedding cake for a wealthy resident whose lavish nuptial celebration includes $200,000 worth of fireworks. Add to this new resident Jared Martin, who may actually be a Canadian construction worker named Frank Tremblay, and Jerry Lee, an aspiring nature photographer who is unmarried, six-foot-nine, weighs 500 pounds, and spends his days as a caregiver to his dying mother. Even Jessica’s Aunt Henrietta and Uncle Roger, grieving from the death of their young son, are running from their deep despair with infidelities and pornography.

Whitaker puts these broken souls into the blender and whips up a fast-paced, compelling narrative full of shady characters “doing bad things for the right reasons.” The result is a bizarre, escalating series of jaw-dropping twists, turns, and big reveals. Winner of the UK Crime Writers’ Association John Creasey New Blood Dagger Award, Tall Oaks is a spellbinding novel that slowly unravels the intertwined lives of a town where “things like this” don’t happen. Except they do.