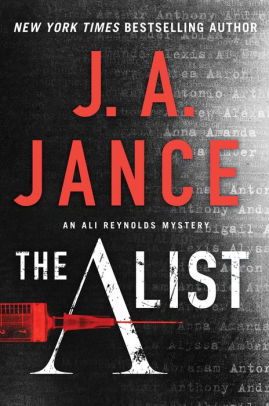 In her 14th Ali Reynolds mystery, J.A. Jance takes us back and forth in time, and to and from a dozen locations, to tell the saga of an imprisoned fertility clinic physician with a deadly agenda. Dr. Edward Gilchrist has tattooed his upper thigh with five initials; it’s what he dubs his “A list.” As in A for annihilation. Reynolds is on that list.

Alison Reynolds anchors one of four (four!) ongoing series by the ultra-busy Jance. The former newscaster was booted from her prominent Southern California gig because she committed the ultimate broadcasting sin—she aged out—but not before reporting one last story that would lead to exposing that Gilchrist was using his own sperm in his fertility clinic’s procedures.

Since returning to her hometown of Sedona, Arizona, Reynolds has reinvented herself over time as the owner of a cybersecurity company. And though now the grandmother of twins, she’s got a handsome, successful and, oh yeah, much younger husband. Did we mention she’s had two previous marriages? Or that she was a single mother when she married hubby number two? That marriage ended when he was mysteriously offed. She was a suspect in his death.

Readers needn’t worry about being up to speed on the assorted backstories. Jance is archaeological. She digs up the histories of almost all her characters and the various cases in which they’ve played a part.

Yes, all those backstories can challenge the narrative flow, but what is most challenging about The A List is all the jumping around in place and time over three different states in a 15-year span as it charts the members of the Progeny Project, a group of women and their children who were victims of Gilchrist. And now the doctor is out for revenge a decade later, aided and abetted by a prison kingpin, and by his own devoted mother—a chilling supporting character.

Woven into all this is the science behind the high-tech artificial intelligence gadgetry used by Ali’s agency and the details about advancements in DNA. And though Jance doesn’t get preachy, the storyline underscores the need for any would-be parent considering a trip to a fertility clinic to do some due diligence.

The A List also has plenty of intrigue, surprises, and heart—a Jance trademark—as it underscores the force of friendship and, for better and worse, the power of a mother’s love.