Online Exclusive
The Summer of Ellen 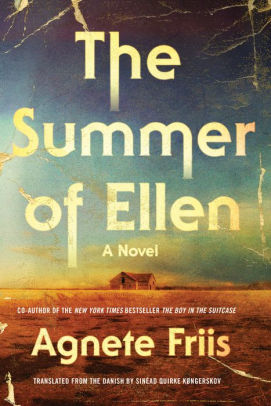 “The older you become, the more you felt the hazy, confused thoughts of your youth. You saw yourself through a fogged window of glass and time.” So observes the morose middle-aged Copenhagen architect Jacob Errbo Nielsen, whose life—which is in flux professionally and personally—is about to be further shaken by his efforts to locate a woman whose presence seared him in his younger days.

The Summer of Ellen, by Agnete Friis (cowriter with Lene Kaaberbøl of the Nina Borg thrillers) delves into events of the summer of 1978. That’s when Nielsen and those around him came under the spell of the entrancing title character.

During that same time period a physically unattractive teenager known as Toad—real name, Lise—went missing. The younger Jacob had many a sexual fantasy about her, and as a close friend of her creepy brother, kept abreast of the fruitless search for her. As the adult Jacob retraces Ellen’s steps, he reexamines the fate of the unfortunate Lise.

The back cover copy for this book says that Jacob’s search uncovers issues of obsession—and the au courant cultural issue of “toxic masculinity.” Nix any thoughts of the latter. This is an atmospheric psychological journey, more character study than overt mystery, that owes much to the raging hormones of male teenagers, and the men they become.

And though it’s a largely male-centric storyline, Ellen is a pretty darn compelling costar. Darkly striking, with deep blue eyes and “a wild forbidden laugh,” she had fled a nearby hippie commune when she asked to stay at the Jutland farm where Jacob lived with his two great uncles. Then a strapping 15-year-old who spent much of his free time obsessing about sex, and—as boys are prone to do—drawing graphic images of female body parts, Jacob was instantly aroused by the older (at 29) free-spirited woman.

Together they hiked the countryside, then sat side by side sketching. She nicknamed him “Utzon,” a nod to the great Danish architect Jørn Oberg Utzon (designer of the Sydney Opera House), and warned him to keep clear of the commune and her former long-haired drug-taking boyfriend.

Meantime, as the search for Lise continues, the sense of foreboding is heightened. Within this farmland setting, slaughterhouses and what occurs within them are more dominant than bucolic fields.

Along with sexually explicit passages, this book includes vivid depictions of animals being butchered. And there’s some cruel (and unnerving) abuse by characters desensitized to the plight of creatures headed for the food supply.

Befitting its late-’70s setting, there are plenty of pop-culture references—many of them Danish. Get ready to Google the likes of Ekstra Bladet (a Danish tabloid), Lily Broberg (Danish film and stage actress), The Olsen Gang (a Danish comedy film series), and Skagen yellow, a particular shade so-named because of the color of paint that dominates the quaint homes of the town that is home to Denmark’s main fishing port.

Speaking of colors, if we had to pick one to describe this book, we’d go with black with a splattering of red, and some bits of blue, to signify the hope that ultimately breaks through.