Books
The Sentence Is Death 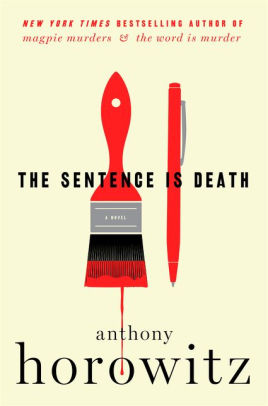 The Sentence Is Death is Anthony Horowitz’s second outing with the clever, wildly wacky, and somewhat-brilliant former Scotland Yard detective turned private investigator Daniel Hawthorne. Horowitz is both the novel’s real-life author and Hawthorne’s fictional chronicler; something like Sherlock Holmes’ Dr. Watson, but where Watson enjoyed his role, Horowitz would rather be writing a screenplay for his television series Foyle’s War or almost anything else other than following the abrasive Hawthorne around.

The celebrity divorce lawyer Richard Pryce is murdered in his home, a pricey bottle of Château Lafite the murder weapon, a cryptic “182” painted on the crime scene’s wall, and his last words heard over a telephone connection were “You shouldn’t be here. It’s too late….” Hawthorne is called in by Scotland Yard due to the crime’s peculiarity. The first suspect is the recent ex-wife of one of Pryce’s clients, the celebrated novelist Akira Anno, who days earlier threatened to hit Pryce with a bottle of wine in a restaurant, but she is far too obvious a suspect. Adding another layer, an old friend of Pryce’s, Gregory Taylor, is hit and killed by a train at King’s Cross Station. Years earlier, Pryce and Taylor were involved in a caving accident where a third man died.

The Sentence Is Death is as clever as a traditional puzzler can be. The mystery develops with a rush, but its complexity builds with a slow brilliance. Horowitz the character is an easy target for the snarky Hawthorne. If Horowitz dares speak to a witness (or anyone else) the detective smirks and glares. When Anno discovers he writes popular fiction, she rolls her eyes and makes a snide remark. But the true brilliance of The Sentence Is Death is how Horowitz spins mystery after mystery, and mysteries within mysteries. It is a true gem that will please the whodunit crowd and anyone else who enjoys a well-told tale.