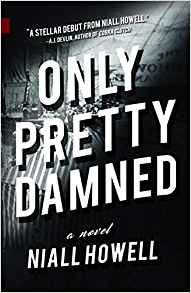 Only Pretty Damned, a tale set under the big tent, is as much a story about place as it is about mystery. In Niall Howell’s debut novel, we follow Toby, a once a high-flying, death-defying trapeze artist who has been demoted to an undercard spot, an opening act for the more important performers. Toby is now a clown who spends time drinking heavily and fussing about his own makeup.

Going on before his former partner and her new cohort, a man he hates, cuts Toby to the core. The hard-drinking clown dreams of being the headliner for the show. When he’s not stewing, he’s dreaming up ways of getting out of the circus entirely with Gloria, a young woman who sees something in him. Toby has a violent past. Would he be willing to use that aggression again? To what lengths would he go to get what he wants?

Only Pretty Damned is a character-driven noir that throws the reader into the backstage crises of a traveling circus. Amidst the tension, the backstabbing, and the long-held resentments of performers toward one another, the reader is brought into Toby's taut and colorful world. You can almost smell the popcorn emanating from the crowds watching. Only Pretty Damned is a slow burn that pays off for those who stick it out until the end.