Online Exclusive
After the Eclipse 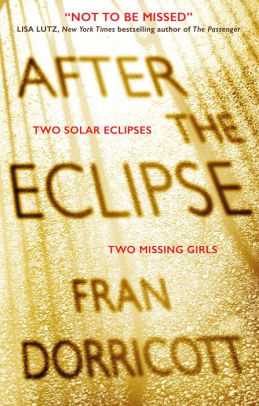 In 1999, Cassie Warren’s 11-year-old sister, Olive, went missing during a solar eclipse. The disappearance nearly destroyed Cassie’s family, and it changed their town of Bishop’s Green forever. For years, Cassie wondered who took Olive, what happened to her, and where she could be, but never found any answers. Then, in 2015, a young girl named Grace goes missing from Bishop’s Green—just days before a solar eclipse. Two solar eclipses and two missing girls from the same town—Cassie doesn’t believe it's a coincidence, and decides to put her skills as a journalist to look for the link between the two cases. Her investigation leads to anonymous threats, hidden dangers, and finally, to the shocking, bittersweet truth.

After the Eclipse is an amazing debut mystery that movingly portrays the pain and damaging effects of child abduction. Author Fran Dorricott’s novel is narrated by Cassie, a flawed character in many ways, but it is more than understandable considering the agony and uncertainty she has lived with for 16 years. Cassie’s drive to solve the case—to prevent another family from living with what her family has had to cope with—is touching and inspiring. The mystery takes many different turns, with a variety of suspects, old secrets, plot twists, suspenseful moments, and action scenes.

The author tackles a serious subject with heart and compassion. Instead of using gratuitous violence and gore, she focuses a great deal on the emotional impact of child abductions. In some ways, the novel seems to pay respect to the families of missing people by accurately showing the devastation that occurs when children are victimized. It honors the victims who survive, and the ones who don’t, by using this story to shine a light on their pain.

Despite all the heartbreak within its pages, After the Eclipse also contains a great deal of hope. Cassie’s determination to save a girl’s life, her meaningful relationship with her grandmother, and the support she receives from friends (and a former lover) all show the good that can still happen even in the middle of tragedy—and speak to the fact that even though nothing can erase the past, there is still a future to be built. Brimming with heartache and hope, bitter loss and sweet surprises, After the Eclipse is sure to move readers.