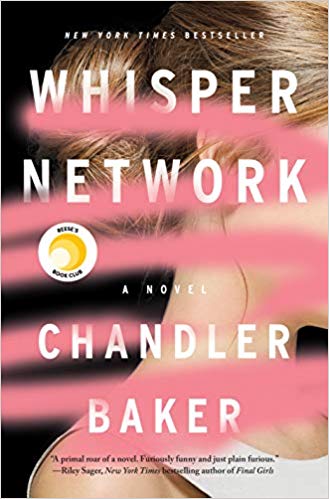 In this era of #MeToo, it’s not surprising that stories about sexual harassment in the workplace would make it into a book. What is impressive is that Chandler Baker has managed to tie such an important topic in with an intriguing murder mystery and even add a little humor.

That’s not to say that this book is funny; in fact, it left me seething. And I would expect this is the reaction of many who read it, as it definitely hits a nerve with any woman who has ever been subjected to unwanted advances in the office. Baker’s litany of examples is uncannily accurate, and reads like a list of HR complaints that, not surprisingly, are never addressed.

The main characters in the story, Sloane, Ardie, and Grace, are all employees of Truviv, Inc., the world’s foremost athletic apparel brand, where office politics—and the ability to look the other way—all play a huge part in their careers. When a new, young female employee is targeted by their male boss, they decide to take action, which ultimately leads to someone’s death. Whether it is murder or suicide becomes the focus of an investigation, one that tests the women and their loyalties, but which is ultimately a testament to their solidarity.

Baker does a masterful job of weaving the women’s story in with employee statements and the deposition transcript, in which numerous witnesses share their impressions of Truviv’s corporate culture and events leading up to the death. This device moves the plot along while providing a unique look at how others in the company view, and often dismiss, sexual harassment. It also shows how the “blame the victim” mentality—of both men and women—not only supports harassers, but ensures that they never have to take responsibility for their actions.

While it might look like a simple whodunit, the Whisper Network has a far deeper message to share about what the #MeToo movement is trying to say. And that should be shouted from the rooftops.