Books
Kopp Sisters on the March 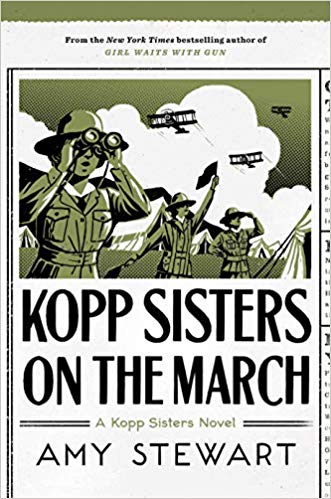 Set in the spring of 1917, Amy Stewart’s engaging fifth Kopp Sisters novel (after Miss Kopp Just Won’t Quit) finds America on the brink of entering WWI. Tired of watching Constance mope over the loss of her job as a Bergen County sheriff’s deputy, Norma enrolls the three siblings at Camp Chevy Chase in Maryland. Run by the National Service School, the facility’s goal is to train women for the female duties of war (bandage- sewing, bed-making, etc.). Upon arriving, Fleurette becomes obsessed with staging a vaudeville show, Norma endeavors to convince the army of the military value of carrier pigeons, and Constance becomes the outpost’s reluctant leader after its originalmatron gets hurt. The trio is so absorbed in their activities that they fail to notice that one of their tentmates, “Roxie Collins,” is actually the notorious Beulah Binford, who hopes that joining the war effort will allow her to start over in France.

Less a mystery than a semifictionalized story about a reallife historical figure branded by her association with a real-life crime, this entertaining book packs plenty of punch. Artfully strewn flashbacks to Beulah’s scandalous past create tension and narrative drive, while vividly sketched characters and a thoughtfully crafted plot spotlight the misogyny of the criminal justice system, the predatory nature of the press, and society’s double standards regarding morality and sex. Humor and hijinks abound, but at its core, Stewart’s latest is a proudly feminist tale about strong, smart women finding the courage to seize control of their lives and chart their own paths. A hopeful, gratifying conclusion leaves readers eager to discover what the future holds for the series’ intrepid heroines.