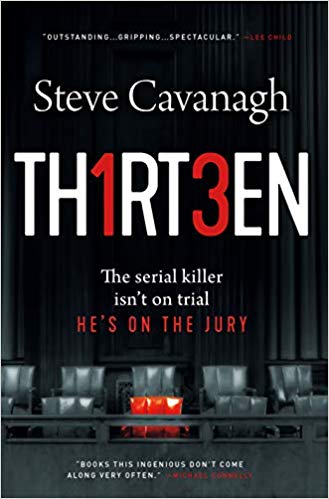 It’s a book with a phenomenal hook: a serial killer maneuvers himself on to the jury for the highest of high-profile celebrity trials, that of Hollywood star Robert Solomon, accused of murdering his wife. But why—to what end? Former con man Eddie Flynn is facing a defense counsel’s worst nightmare—a client he believes might very well be innocent, but who’s facing an overwhelming case against him, and a DA hungry for victory. Is the actor merely playing a role for Flynn, or is he being set up? Meanwhile Joshua Kane has killed someone to take a spot in the jury box. Cavanagh leads readers on a merry dance between Kane’s and Flynn’s perspectives on the unfolding trial, keeping the intrigue and tension high.

Flynn is in a chess match, but doesn’t even know all the opponents he’s playing as he fights the odds in the courtroom and tries not to mess up his own personal life even further. This is compelling, propulsive storytelling. It over-delivers on all the promise of its high-concept hook, providing plenty of depth and character to go with the clever storytelling. Cavanagh has already laid down plenty of evidence to show he’s a force to be reckoned with in the legal-thriller world, but Thirteen may just be the crucial testimony that ensures a slam-dunk verdict: that he’s right at the top of the field. Guilty as charged.