Books
Tell Me Everything 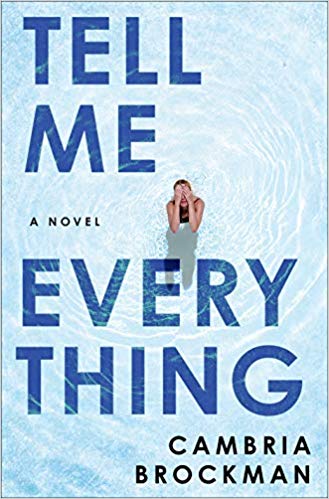 When she first turns up to Hawthorne College, introverted incoming freshman Malin Ahlberg—the narrator in Cambria Brockman’s debut thriller Tell Me Everything—makes it her mission to join a close-knit group of friends. As luck would have it, their jolly and diverse group welcomes the Texas newcomer into their New England small-town ways. She latches on to Ruby, an athletic, smart, and beautiful art history major, and the two quickly become besties.

It soon becomes clear, though, that Malin has unusual reasons for doing this, as is hinted when at the beginning of the school year, her father gently advises Malin to make friends and lead a “normal” life as best she can at college. Brockman uses brief flashbacks to Malin’s childhood interspersed throughout the chapters to reveal Malin’s strange and tragic upbringing. Clearly someone good at keeping secrets, she becomes the secret-keeper to her friends. She also digs and secretly reads diaries; she quietly records and remembers everything over the group’s four years at Hawthorne, a time together that culminates in a surprising and violent death.

As readers follow Malin and her friends from the first days of freshman year through their senior year, when they are more confident and in fuller form, it becomes increasingly apparent that Malin’s agenda is less than completely friendly. As Brockman weaves through the senior-year narrative, the tension rises and Malin puts a plan into action that has so many moving pieces that somewhere along the way it will surely fall apart.

As a main character, Malin is unusual, and refreshingly so. Although she enters the tale as an introverted outsider, she is neither meek nor in need of being taken under a charismatic leader’s wing. She has her own unsavory motives and mysterious plans that she is more than happy to execute, but she is more complex than that. She supports Ruby through her friend’s abusive relationship with the handsome and unfaithful John, and Malin feels a special kinship with the quiet and contemplative Max (who picks up aspects of Malin that she believes she is successfully hiding). Tell Me Everything is a forceful debut mystery and I would be happy to read Brockman’s next twisty tale.