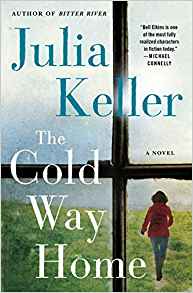 The terrible opiate problem we have in the United States is front and center in Pulitzer Prize-winning author Julia Keller’s new mystery, The Cold Way Home, set in her native West Virginia. The eighth in the Bell Elkins series, it can easily be read as a standalone. Acker’s Gap, like many rural towns, is struggling with a generation of young people dead or strung out on drugs. Keller’s deft description of the impact addiction has on the infrastructure of a small town is startling, and forms the backdrop for the action in the book.

Bell Elkins, a former prosecutor waiting for her license to be reinstated, has teamed up with two friends— former sheriff Nick Fogelsong, back in town after a devastating divorce, and former deputy Jake Oakes, sidelined in a wheelchair from a servicerelated gunshot—to form a detective agency. Both men join Bell in a search for a missing teenage girl.

The girl is fine. Instead, Bell finds the body of Darla Gilley, the sister of Nick’s best friend. The victim is discovered on the grounds of Wellwood, a psychiatric hospital for the poor that has been long abandoned to fire and decay. West Virginia holds the dubious prize of performing the most lobotomies in the United States in the 1950s, the majority on women. This true fact skillfully plays into the murder, which is a consequence of secrets, poverty, and family pride. With very wellwritten, complex characters at its core, The Cold Way Home combines mystery and social commentary into a read you’ll long remember.