Audiobooks
The Sentence Is Death 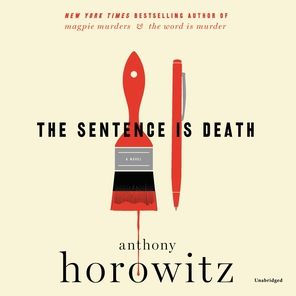 Why is this one of my favorite audio mysteries of the year? Let me count the ways. Horowitz’s reappearance as the investigation’s Watson is as hilariously self-deprecating as it was in The Word Is Murder. There’s even more about the author’s ups and downs writing for the Foyle’s War TV series. The main sleuth, Daniel Hawthorne, is just as rigid in keeping his clever deductions from his “biographer” Horowitz, while sadistically encouraging him to blunder into incorrect conclusions. The victim is a celebrated divorce lawyer whom, of course, everyone who knew him wished him dead. (Note to Author: Be careful with your names. The vic’s is Richard Pryce. On paper: OK. Via audio: this triggers the image of novelist, screenwriter Richard Price—The Wire, The Deuce, Stephen King’s The Outsider. It’s something of a mood-breaker.) The clues, the murder weapon, a nearly $4,000 bottle of Chateau Lafite Rothschild, a numeral in green paint near the corpse, et al, are both perplexing and satisfyingly explained. There is a particularly loathsome, criminal actually, policewoman whose match will be met by Hawthorne. Actor Kinnear makes her spectacularly officious and nasty. Once again, he captures the book’s Horowitz in all his frustrated, fearful, embarrassed and peevish indignity. His Hawthorne is tight-lipped, implacable, and annoyingly always right. Other characters, suspects in the main, are treated to appropriate vocals. But Kinnear’s main success rests in the way he captures the mood established by the author, the perfect matchup of mirth and mystery.