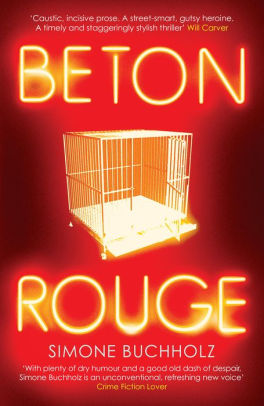 Hamburg author Simone Buchholz’s crime writing is like a straight shot of top-shelf liquor: smooth yet fiery, packing a punch, full of substance, but with no extraneous ingredients watering things down. After topping bestseller charts and scooping awards in Germany, her series starring hard-living prosecutor Chastity Riley has recently started being translated into English, with Beton Rouge the second tale.

Like the novel itself, Chastity Riley is razor-sharp and seasoned with dry humor. On a warm September morning she’s called to a shocking scene outside the offices of one of Germany’s biggest magazines. The kerfuffle has been caused by the appearance of a tortured man in a cage. He’s naked and unconscious, but alive, and is later identified as a manager at the publishing company. Days later, another tortured manager from the same company appears inside another cage. Just who is targeting these managers, and why? Is it workplace payback, vengeance for a media story, or something even darker?

Teaming with her new police colleague Ivo Stepanovic, Chastity scrambles for any clue or lead. The pair travel south as they learn more about the victims, two friends linked not only by their jobs but their boarding school past. Could that be where the real motive lies? A dubious history, unforgotten and unforgiven.

There’s a dark energy to this fast and furious tale. Buchholz has plenty of style in her storytelling. Along with translator Rachel Ward, she writes in a way that’s punchy but poetic, like a haiku more than a saga, a slice of translated crime that sparkles darkly. Brusque storytelling blends with a crackling heroine, whose viewpoint veers noir in a terrific tale that has a real sense of energy throughout.