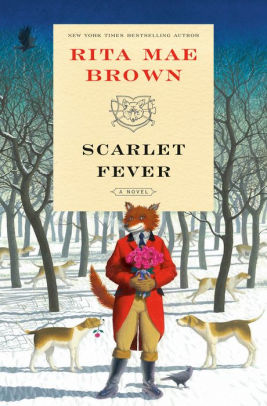 In Scarlet Fever, number 12 in Rita Mae Brown’s long-running Sister Jane series, it’s late February and Jane and her fox hunting crew just want a few decent hunts to end a miserable hunting season. But instead of Mother Nature bestowing good hunting weather, she is being blamed for the death of Sister’s buddy, fellow rider and antique dealer Harry Dunbar, who appears to have fallen down the steps of an upscale fox hunting retail store. But Harry’s not always been known for his business ethics, which leads Sister to wonder if, in fact, Harry’s death was accidental. Could he have a reason to take his own life or have had help getting to the bottom of those stairs?

Brown, being a huntsman  herself, weaves yet another  very believable cozy mystery  intertwined with Virginia fox  hunting facts in her latest installment. Her sophisticated  pictorial narrative gives life  to this fast-paced novel, while  giving voices to her furry characters adds just a bit of whimsy. Her exhilarating sportscaster-like delivery of the hunt paints quite the picture for her audience of men and women in top hats and tails flying down a field on horseback as they follow a pack of howling hounds on the trail of a wily fox. Although the mystery is exclusive to this episode, new readers to the series will quickly find themselves in a world of settings and established human and animal characters in a series that is definitely best read in order.