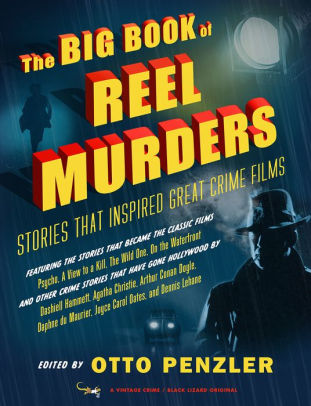 A big-ass collection of short stories and novellas that inspired some great—and, OK, some not-so-great—movies, from the likes of Arthur Conan Doyle, Raoul Whitfield, Agatha Christie, Dashiell Hammett, Dennis Lehane, Edgar Allan Poe, Charlotte Armstrong, Ian Fleming, and Cornell Woolrich (who turns out to be the book’s secret weapon, kicking in more stories than anyone).

Mind you, some of the stories and novellas ain’t so hot, either. Still, with over 60 stories and weighing in at over a thousand pages (making it arguably closer to blunt object than a literary tome), this monster’s bound to have at least a few yarns to tickle your fancy.

Otto Penzler admits as much in his brief but revelatory intro—he must have been in confessional mode. He not only cites his favorite crime films taken from novels and original screenplays, but also those based on short stories (among them Psycho, On the Waterfront, Gun Crazy, Witness for the Prosecution, Bad Day at Black Rock, and The Lodger), all of which appear here. He also admits another of his faves, The Killers, was not included because the Hemingway estate wouldn’t play ball.

Of course, every story comes gift-wrapped with its own concise introduction, detailing the author, bibliographical details, and the often-hilarious (or at least puzzling) disconnect on the journey from the printed page to the silver screen, such as how Frederick Nebel’s tough-as-nails Kennedy and McBride series in the pulps, built on the rivalry between a hardboiled newspaper reporter and an even harder-boiled police detective, somehow became the basis for the Torchy Blane flicks, a string of frothy screwball rom-com mysteries centered on the romance between a feisty, motor-mouth blonde reporter with a nose for news and a not-always-bright police lieutenant.

Penzler also notes those glorious times the moviemakers got it right, or even improved on the original, as in Raoul Whitfield’s “Inside Job,” a 1932 Black Mask story that became, thanks to a clever framing sequence, something of a film-noir cult classic, the little-seen but highly acclaimed High Tide from 1946, apparently recently restored by the Film Noir Foundation. Now that’s one I really want to see.

And honestly, that’s the real appeal of this book. It’s a voyage of discovery, and who knows what we’ll find. Set sail, and pass the popcorn.