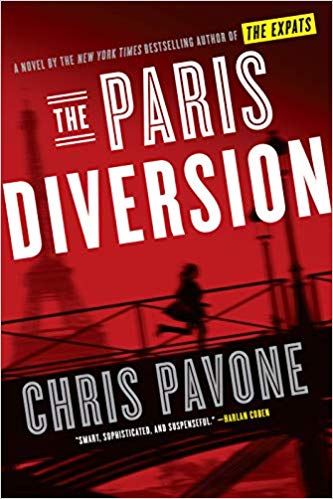 Sirens wail as Kate Moore drops her two children off at their international school in the chic Paris neighborhood of St. Germain, exchanging air-kisses with the other mothers on a seemingly ordinary fall day. She and her husband Dexter spend their days in much the same way as the other well-to-do expats in their social set. Kate is planning a dinner party that evening; Dexter is a day trader. Except that Kate’s part-time “consulting” work is cover for a clandestine intelligence operation that she runs—while fearing that it may be shut down any day, since her immediate boss has disappeared.

Meanwhile, a suicide bomber enters the courtyard of the Louvre. There are bomb threats at the major train stations. Dexter plans to win big with a risky bet on an insider tip. And Dexter’s former boss, multinational CEO Hunter Forsyth, is about to announce a major acquisition—until his day takes a sudden dramatic turn for the worse.

Quick-cutting among multiple characters, points of view, and settings, The Paris Diversion plunges the reader into a complicated web of action and suspense from the very first page. Over the course of a single day in the City of Light, a dozen lives will be drastically altered—or ended; multimilllion-dollar fortunes will be made and lost. As Kate races to figure out who is behind the terror threats, and why, she must untangle a complex web of relationships and confront shadowy figures from her past.

It’s not necessary to have read Chris Pavone’s award-winning The Expats to follow and enjoy The Paris Diversion. If you have, you surely won’t be disappointed in this tightly plotted sequel, and if you haven’t, you may want to go back to it after reading this second installment.