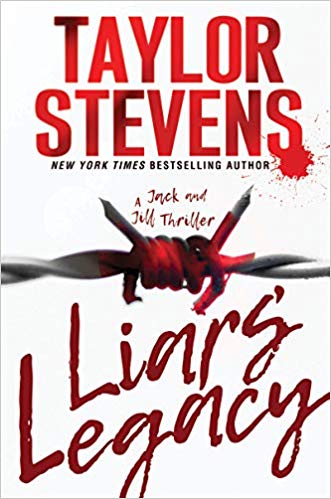 In her enthralling follow up to 2018’s Liar’s Paradox, the first Jack and Jill Thriller, author Stevens follows her lethal twin protagonists on their first adventure in a “post Broker” world, one where all the rules and relationships in the world of espionage and assassination have dramatically changed. In this strange, “What happens now?” type environment, the siblings, who have heretofore only known the macabre ministrations of their manipulative mother, receive a message from someone claiming to be their long-lost father, and so embark on a long journey to finally meet him face to face. It’s a perilous odyssey, fraught with danger, as they are pursued by multiple intelligence agencies, who seek to enlist their specialized services, or see them dead.

Liar’s Legacy is a rewarding, tense and exhausting read, heavy on action, suspense, paranoia, and tradecraft, but also careful to explore the psyches, perspectives, and intricate relationships among its large and varied cast. It’s a book that requires your strict attention, as there are many moving parts (so many, in fact, that a character pauses about a third of the way through to do a mental recap of the events up to that point, just to make sure he’s covering all his bases). It would help to have read Liar’s Paradox, as that would cast light on certain key relationships; there is also the unspoken promise of sequels, making this a transitional work. That said, it is still an effective standalone thriller, always surprising, always engaging, a visit to a treacherous world of sudden death, ever shifting alliances, and uneasy personal relationships.