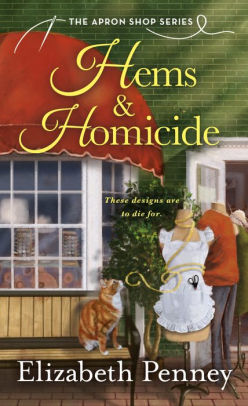 Elizabeth Penney’s Hems & Homicide is first in a new series set in tiny Blueberry Cove, Maine. Central character Iris Buckley lives with the person who raised her, her Grammie, and is planning to open a store selling vintage textiles and handmade aprons with a vintage feel.

Because this is the first in a series, Penney spends time introducing Iris’ friend group, setting the stage of the town and the relationships between the various characters, and explaining (to a degree) Iris’ “origin story,” though, like every good mystery novelist, she isn’t revealing everything about her heroine in the first book.

This story has two threads, one in the past, involving a skull Iris stumbles over in the basement of her as-yet-unrenovated store, and one concerning a fresher corpse that also turns up there. Because the dead woman—recognized by Grammie as “Star Moonshine,” a wandering hippie girl from the tail end of the ’60s—had ties to many of Blueberry Cove’s older citizens, there’s a nice suspect pool for the police and Iris, who both believe the two crimes are connected.

The parts that involve the vintage fabrics and textiles Iris finds around the county were the most captivating and original of the whole novel, setting it apart from similar cozies. I’m looking forward to where Penney goes with her next outing—and hoping she might take a page from Barbara Michaels’ classic Shattered Silk (1986) and make the materials themselves more of a focal point.