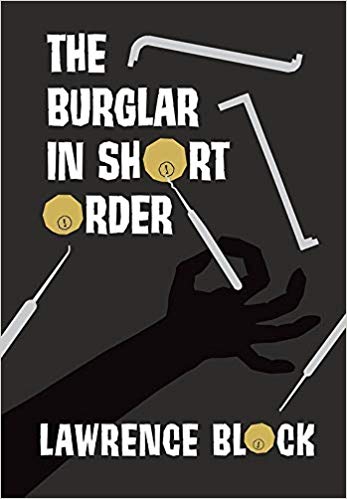 Lawrence Block’s body of work is so vast and rich that a reader could spend many happy years reading nothing else. The publication of The Burglar in Short Order, a Bernie Rhodenbarr collection, brings even more evidence of Block’s brilliance. This slim collection is exhaustive and includes both fiction and nonfiction. A few of the stories are excerpts from Bernie’s novels, but they work perfectly well as standalone tales, and as Block explains, they were published in short form elsewhere before inclusion here. There is the first Rhodenbarr story, “A Bad Night for Burglars,” which isn’t quite Bernie since something awkward happens to the burglar in the climactic moments, but nonetheless, Block claims it as the genesis of the smooth burglar.

There are three stories told from the perspective of Bernie’s best friend, Carolyn Kaiser, and they offer a different shade of Rhodenbarr. There is a funny essay about how Whoopi Goldberg became Bernie (and Bob Goldthwait became Carolyn) in the 1987 film adaptation, Burglar. Another essay titled “Five Books Bernie Has Read More Than Once” gave me the uneasy realization that Bernie and I have similar reading tastes. The only problem with the collection (and this is a good complaint to have): I wish there were more.