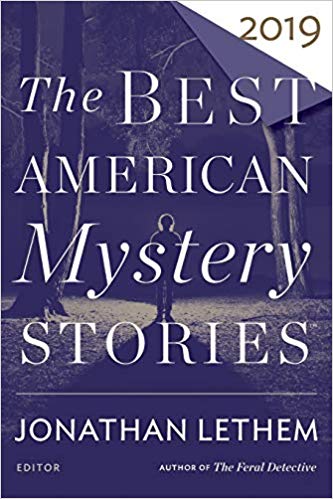 The Best American Mystery Stories 2019, edited by Jonathan Lethem and Otto Penzler, is a different beast from what it has been the last few years. The hardboiled tales about detectives and criminals have been replaced with atmospheric and psychological stories about ordinary people whose ordinary lives are forever changed by uncontrolled human emotion—or as Otto Penzler writes in his foreword, the stories are about “despair, hate, greed, fear, envy, insanity, or love—sometimes in combination.” In short, the tales uncover a dark truth about our humanity while still finding time to entertain the reader.

Joyce Carol Oates’ “The Archivist” is a disturbing tale about a middle school math teacher and a young student. It transcends the simple power of an abuse story—an authority figure taking advantage of a powerless victim—with a wide-lens view of love, hate, misogyny, racism, fear, and that yearning each of us have for acceptance and love. It also acts to deepen my literary crush on Ms. Oates’ writing. “If You Say So,” by Suzanne Proulx, is a clever and surprising story about a young man with a fixation on a beautiful and well-heeled woman with fetishes for candid photography and bad poetry.

“Open House,” by Reed Johnson, is a sorrowful story about race and dignity. A father redeems himself in the eyes of his young daughter, but this redemption is little noticed by the world at large. Jennifer McMahon’s “Hannah-Beast” is as much a horror story as it is a mystery. It reminded me of Stephen King’s Carrie with its crushing tale of bullying and the fragility of human emotion. It is a story of regret and loss, but mostly it is a story about our sins. “Interpreting American Gothic,” by Rebecca McKanna, is a cagey story about a museum employee who befriends a prison inmate and somewhere along the way discovers something about herself.

The book’s 20 tales cut a deep vein, providing the reader with a depth of emotion and, at times, deep meaning. The stories are character-driven—there are no impossible crimes or procedurals in sight—and combine into a beautiful, if bleak, elixir. Also included are fine stories by Mark Mayer, Amanda Rea, Sharon Hunt, Brian Panowich, Harley Jane Kozak, and many others.