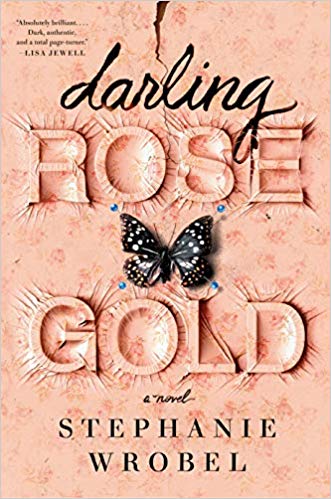 In Stephanie Wrobel’s debut psychological suspense thriller, Darling Rose Gold, the author makes the inspired choice to reveal the source of the mystery from the top. It’s no secret that Patty Watts has poisoned her daughter, Rose Gold, from infancy. The novel opens with Patty being released from prison, having served five years for child abuse. What Wrobel does keep as a sinister secret is what happens next.

When Patty returns to her hometown of Deadwick, Illinois, it is a town without pity—for good reason. The community supplied years of sympathy and support, food and comfort for the family, when people believed that Rose was ill and dying. Patty claimed that Rose had pyloric stenosis, suffered from sleep apnea, had cancer. Rose’s childhood was filled with feeding tubes, a shaved head, and interminable doctor visits that resulted in no diagnoses. The people of Deadwick don’t understand why Rose would welcome her mother back to live with her, much less allow her to help care for Rose’s two-year-old grandson, Adam. Residents shun them.

Meanwhile, Rose seeks out her biological father. It seems all she wants is a loving family. For a time it looks as though that might happen. Turns out her father, Billy Gillespie, has been searching for her, too. When they connect both make an effort to establish a relationship. He introduces her to his wife and children. Rose embeds herself into his family, ingratiating herself with one of the daughters. When she begins to assert herself as a member of the group, even inviting herself on a family camping vacation to Yellowstone, Billy senses danger and urges a temporary respite.

Patty and Rose supply their own truths in alternating chapters, unfurling the tale from each of their perspectives. It quickly becomes clear that both have existed in a state of delusion and denial for years—and that mother and daughter are each developing nefarious schemes. Revenge seems to be at the forefront of their plans, and Wrobel’s narrative has surprises in store for both of them. The biggest surprise of all, though, she saves for the reader. When it is revealed, it shatters all expectations. The pages of Darling Rose Gold practically turn themselves in this clever tale of dueling psychoses.