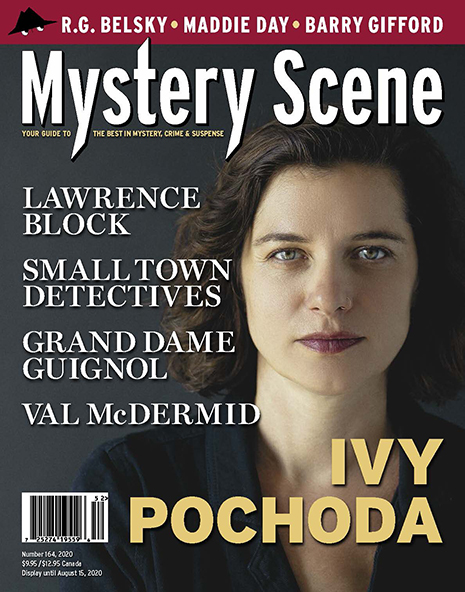 The world has changed since our last issue made its way to you and we hope this finds you safe and well.

As a result of the coronavirus social distancing requirements, our team has been scattered and working from home these last two months. It’s been challenging, to say the least. As a reader, you won’t find anything very different about this issue except for some reviews in the MS Reviews section. A few books have been delayed which we only discovered right before going to press. There’s going to be a lot of disruption in the book business for the rest of 2020, so check with your local bookseller and/or librarian if you have trouble finding a book.

Ivy Pochoda calls her latest novel, These Women, “a serial killerless version of what is the traditional serial killer book.” Instead of focusing on the criminal, it focuses on the lives of the women around him. Pochoda has an interesting background for a mystery writer: she was a professional squash player from 1998–2007. She also studied classical Greek drama at Harvard. The violence, structure, and drive inherent in each of these areas of endeavor intersect in contemporary mystery fiction she believes. Find out more in Oline Cogdill’s profile of this up-and-coming writer.

Grand Guignol is “dramatic entertainment featuring the gruesome or horrible.” Take that concept and add some of Hollywood’s biggest divas—Bette Davis, Joan Crawford, Barbary Stanwyck—and you have Grand Dame Guignol, a type of movie dear to the heart of our contributor Michael Mallory. Beginning with What Ever Happened to Baby Jane? in 1962, these grisly dramas were popular with audiences for almost a decade.

There’s an ineffable bond between creator and character. Take author Lawrence Block and Bernie Rhodenbarr, his burglar/bookseller who has starred in 11 novels and four short stories since 1977. These two old friends met recently at Barnegat Books and had a conversation about the last 40 years and the foreseeable future. Don’t miss it!

“Cozies certainly provide solace from many of the dark edges of the actual world,” says author Edith Maxwell, aka Maddie Day. “I know many readers want a book where justice is restored to the community by the end. Where they don’t have to read about torture, other graphic violence, or child abuse....The legions of cozy fans out there know they won’t feel worse about the world when they finish the story.” What could be better these days? Find out more in John B. Valeri’s chat with Maxwell.

Acclaimed for his Sailor and Lula stories, including Wild at Heart, Barry Gifford is well known to fans of modern noir. But it was his stint as a book publisher at the influential Black Lizard imprint that revived the work of such masters as Jim Thompson, Helen Nielsen, and Charles Willeford. Joseph Goodrich talks to the author about his love for “the beautiful dark.”

While big city crime gets all the attention, there’s still plenty of mayhem in small-town America. In this issue, Ben Boulden offers up four private eyes who live and work in the small towns and rural areas where so many of us spend our lives.

Decades as a journalist in the Big Apple are what inspire R. G. Belsky. “I try and capture the magnitude of the New York City experience wherever I can in my books,” he says. “Setting scenes at places like Rockefeller Center or Central Park or Times Square and all the rest.” Belsky talks with John B. Valeri in this issue.

Scottish author Val McDermid is a giant of contemporary crime fiction. Craig Sisterson offers an appreciation of McDermid’s work over the last 30 years along with some intriguing insights from the author herself.

Also in this issue, we have interesting My Book essays contributed by Al Pessin and Dana King.