Books
Whatever It Takes 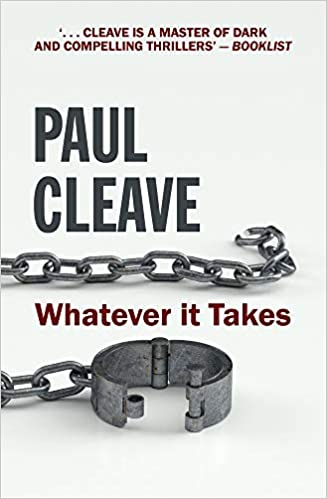 How far would you go to save an abducted child? That’s a question quickly answered for Sheriff’s Deputy Noah Harper in Edgar-nominated Paul Cleave’s superb 11th thriller, Whatever It Takes. Bloodied hands and gunpowder residue are evidence of Noah’s method—a rescued young girl and the self-destruction of his own life the result. Job gone, marriage gone, he is banished from the town of Acacia Pines.

Twelve years later, Noah is sorta happy, working in a bar far, far away. Then Alyssa, the abducted young girl who’s now a young woman, goes missing again, and a dying priest asks for Noah’s help. Reluctantly, the former deputy returns to Acacia Pines, and is forced to face up to his old boss, old friends, and old enemies—as well as his own past sins. Can he find Alyssa once more? How far is he willing to go this time?

After ten thrillers set in his hometown of Christchurch, New Zealand—international bestsellers that scooped awards and critical acclaim—Cleave’s first tale set in the United States delivers the morally compromised characters, crackling prose, strong settings, and dark plotlines seasoned with sly humor we’ve come to expect. There’s a fizz to Cleave’s writing, an electric current beneath the dark deeds. While he’s swapped his southern city for an American small town of sawmills, vast forests, and hiking trails, Cleave still delivers a page-whirrer that touches on tough issues while never failing to entertain.

Whatever It Takes is an excellent novel from a maestro at the darker edge of crime writing.