Books
Edgar Allan Poe and the Empire of the Dead 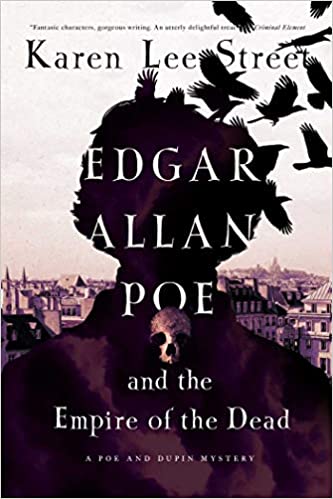 Edgar Allan Poe and the Empire of the Dead is the excellent conclusion to Karen Lee Street’s Poe and Dupin trilogy. It begins in 1849 in Baltimore on a blustery October day, less than a week before Poe’s death. In a vision, Poe’s beloved Virginia leads him to an apothecary to reveal the poison used in his murder. He hopes that he can finally notify his friend, C. Auguste Dupin, of “the truth about how I had finally been murdered and by whom.”

The story falls back to June, 1849, when Poe receives a letter from Dupin—the French detective from Poe’s own tale “The Murders in the Rue Morgue”—inviting Poe to join him in Paris. Dupin has a lead on Ernest Valdemar, the man who “sent Dupin’s paternal grandparents to the guillotine…murdered his mother, and provoked the death of his father.” Dupin requests Poe’s assistance to track the villain down. It’s a quest Poe readily accepts, but when he arrives on the scene, things are not at all what he had thought, and the mystery is much more personal than he had expected.

Edgar Allan Poe and the Empire of the Dead is a brilliant historical whodunit. The prose is perfectly Poe—at once drenched with wonder and dread. Poe’s presentation as a wounded, sorrowful, intelligent, and complicated man is believable and alluring. The story’s opening is a cataclysm of promise. It’s a promise that is kept by the twisty, surprising, and suspense-filled plot, not to mention the perfect climax that answers every question with style. Empire of the Dead is everything a reader of traditional mysteries or an admirer of Edgar Allan Poe could possibly want.