Books
Hole in the World 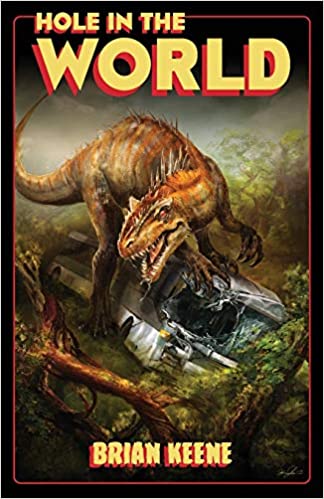 If you enjoy Burroughs and his literary progeny, you’ll get a big kick out of the work of Brian Keene’s Lost Level books, which began in 2014 with The Lost Level, and continued in 2018 with (what else?) Return to the Lost Level. The Lost Level novels owe a lot to Burroughs, and to other fantasists like Joe R. Lansdale, whose much lauded Drive-In series treated with similar notions. The latest in the series is a prequel to the first two books, titled Hole in the World. Full of good, clean, gory fun, it follows the misadventures of 19 poor souls who find themselves abruptly transported from an airport in Baltimore, Maryland, to another reality, where they are confronted with mind wrenching anachronisms and anomalies and a plethora of lethal flora and fauna. This being a Brian Keene novel, it’s a pretty safe bet that the unlucky tourists don’t fare too well, with many of their number succumbing immediately to the perils their new existence throws at them.