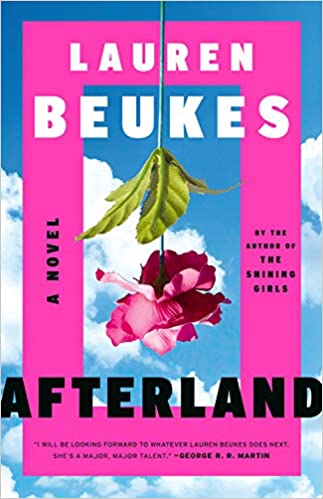 Picture The Handmaid’s Tale flipped on its head and you’ll understand the premise behind Afterland, a new dystopian thriller by Lauren Beukes. This time, HCV (Human Culgoa Virus) has infected the men of Earth, killing them with an aggressive prostate cancer. Only a few men and boys survive the pandemic.

One survivor is 12-year-old Miles Carmichael-Brady, who seems immune to the virus. Born in South Africa to mom Cole and American dad Devon, the family was visiting relatives in California during the summer of 2020, when the virus outbreak trapped them in the States. (Yes, the coincidence wasn’t lost on this reviewer.) Devon didn’t survive.

Now it’s June 2023, and Cole and Miles are being held for their own safety by the Department of Men. All males immune to the virus are under lock and key. Their sperm is so valuable that people will kill for it— which is where Cole’s sister Billie comes in. An opportunistic bitch (there’s no other word for her) and one of the more loathsome characters in this book, she wants to make money off her nephew.

I wish I could report that a fictional world full of women was a better place, but that’s not what author Lauren Beukes has imagined. When Cole busts herself and Miles out of quarantine the women we meet mimic violent men, matching them for cruelty, aggressive sexuality, and violence. The anchoring characters are the mother and son. Cole devotes all her energy and resources into getting Miles out of America and back home. Her selfless concern for his welfare is the shining center of the book.

The reader gets a welcome respite from the nastiness in the surprising form of a busload of nuns. The traveling sisters belong to the cultlike Church of All Sorrows, which preaches that the only way to restore normalcy is for all survivors to endlessly confess their sins and repent. Miles and Cole, disguised as converts, hitch a ride and head for Miami. The plan is to somehow get back to Johannesburg.

I found plenty of gaps in the Afterland world-building that left me with a bucket full of questions. The biggest one is why Cole thinks Miles will be treated any differently in South Africa. Despite these gaps, I found it to be a timely and thought-provoking futuristic novel.