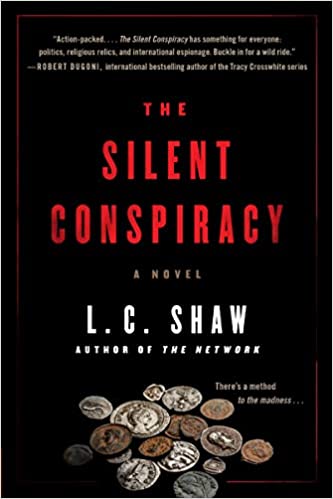 In The Silent Conspiracy, author L.C. Shaw (one of Lynn Constantine’s pseudonyms) tosses everything into her plot but the proverbial kitchen sink. This is the follow-up to The Network, which features investigative reporter Jack Logan. We have a dead Nazi, religious secrets that involve both the Greek Orthodox Church and the Catholic Church, a looming Supreme Court decision, and the 30 pieces of silver Judas Iscariot earned for betraying Jesus. The first few chapters heroically bring the reader up to speed on the complicated plot.

Arch villain Damon Crosse, who has faked his own death, is desperate to achieve immortality by possessing all 30 coins and their supernatural power. Jack’s wife, Taylor Parks (who is the secret daughter of Damon Crosse), and her child Evan, are innocent victims of Crosse’s diabolic scheming. Two-year- old Evan’s blood is necessary to activate the coins.

A subplot involving the vice president of the United States simply serves to ramp up the tension. Was it entertaining? Once you accept that nothing in this over-the-top thriller needs to make sense, The Silent Conspiracy succeeds as a very diverting soap opera. The pace is zippy, Jack and his family are sympathetic characters, and if you enjoy this kind of thriller, you can lose yourself in the action. Don’t expect an ending that ties things up, however. You’ll have to tune in to the next book.