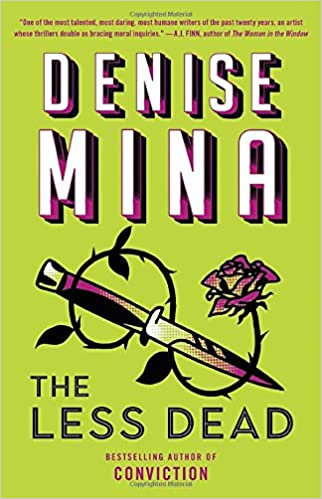 Written entirely in the present tense, The Less Dead draws the reader in with a feeling of immediacy and unconventional, true-to-life characters.

Margo Dunlop, a capable young Glasgow physician at a turning point in her (until now) ordinary life, feels simultaneously stuck and adrift. She recently lost her adoptive mother and has abruptly split up with her boyfriend. She’s newly pregnant and hasn’t told anyone. Her brother is living abroad, and her volatile best friend is in a troubled relationship with the brother of Margo’s ex.

Margo is home clearing out her mother’s big, messy old house, when she finds a stash of letters from her birth mother’s sister Nikki hidden under the bed. Curious about what genetic traits she might pass on to her unborn child, Margo arranges through the adoption agency to meet her aunt. She is stunned to learn that her birth mother was murdered not long after Margo’s birth. Nikki believes the killer is still at large and sending her threatening letters. She says she knows who he is, and she asks Margo to help her bring him to justice.

Margo wants nothing to do with Nikki’s drama—until she also receives a threatening letter. Soon she, and the reader, are drawn into a gritty world of sex work, sex crimes, poverty, addiction, official indifference, and failed justice. Unsure whom she can trust, and determined to learn what kind of person her birth mother was, Margo begins to realize that there is power in making intentional choices even in desperate circumstances. As she confronts and questions her own motivations and preconceptions, Margo discovers unexpected resilience and inner strength.

The Less Dead is an unusual, psychologically astute thriller that tackles difficult social issues thoughtfully, brings memorable characters to life, and builds to a shocking conclusion.