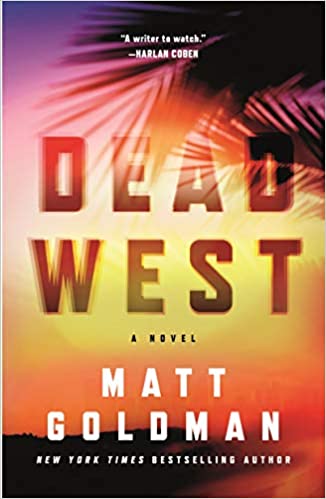 Have you seen my socks? Because Matt Goldman’s latest just blew mine away.

I’m a sucker for a good PI tale, and while Goldman may not break any new ground in this, the fourth in the series, he injects so much fresh heart into the tale, it’s like falling in love with the shamus game all over again.

Minneapolis gumshoe Nils Shapiro is offered a job by Beverly Mayer, a mega-wealthy, imperious control freak, to fly out to sunny Los Angeles to attend a memorial service for the fiancée of her intended heir and grandson, Ebben Mayer. But her real concern is whether Ebben is squandering his trust fund on some cockamamie Hollywood scheme.

It’s February, it’s freezing in the Twin Cities, Beverly is offering Nils $25,000 for a few days’ work, and he’s never been to sunny, shiny La-La Land. How can he say no? He picks up his pal, Jameson, a hefty former pro football player (for the Montreal Alouettes) turned nurse practitioner, to act as a guide, and the two best buds head off to the airport.

Once they arrive, Nils soon discovers that Ebben is no starstruck trust fund bozo, but a young man in genuine pain over the death of his fiancée. And serious—he’s also been studying film and finance for years, and knows exactly what he wants to do. A quick phone call to reassure grandma, and Nils is more than ready to catch the red-eye home to his own fiancée and his infant daughter.

Except…somehow, Jameson has gone AWOL, Ebben’s fiancée may have been murdered, and somebody may be out to stop Ebben’s film project—at any cost.

Part of the joy of the book is simply Nils. He’s a decent, levelheaded, and relatively unscarred guy in a business not exactly overpopulated with them, an ex-cop with a “disproportionate sense of justice” who admits he’s not particularly tough—although his defensive use of a marshmallow ought to score him some kind of tough-guy points. And his new-kid-in-town take on Tinsel Town culture and its various denizens may be worth the price of admission alone; the razor-sharp observations, tempered with equal amounts of wit and empathy, making it all go down easy.

But it’s the heart and soul Goldman sneaks into this tough little tale of loss and love, particularly its final scenes, that sucker punched me. In an unexpectedly good way. More Shapiro, please.