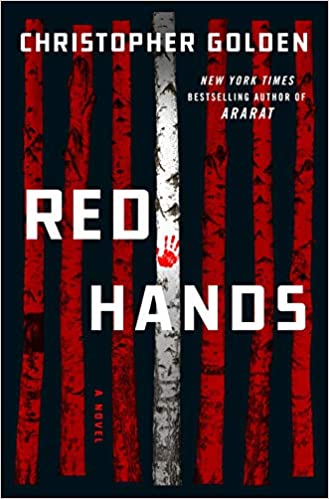 Ben Walker, the stoic star of 2017’s Ararat and 2019’s The Pandora Room, is back in Red Hands on another life-or-death, top secret mission. This time out, he faces an implacable, silent foe, an ancient virus (or perhaps an ancient entity?) that inhabits its hosts, turning them into murder machines able to kill with a single touch.

When the virus infects a civilian, Walker is asked to bring in the sick for the host’s safety, as well as the safety of all those in the area. Although he questions the real motives of his superiors, Walker embarks on his mission, hoping to prevent any further loss of life. Doing so, he’s forced to contend with local authorities, interagency infighting, foreign agents, the victim’s family and friends, a hostile terrain, and a virus that seems almost sentient at times.

Well-crafted, cleverly plotted, and expertly paced, Christopher Golden’s latest features him doing what he does best, creating realistic, vividly rendered characters whom readers quickly come to identify and empathize with—then putting them through some of the most stressful scenarios imaginable.

Walker again proves to be a versatile, admirable, yet subtly flawed hero, who struggles with his personal life even as he deals with problems that would break a normal person. Chilling, terrifying, and featuring some truly terrific action set pieces, Red Hands is a heart-pounder that you are both oddly relieved, yet noticeably saddened, to finish.