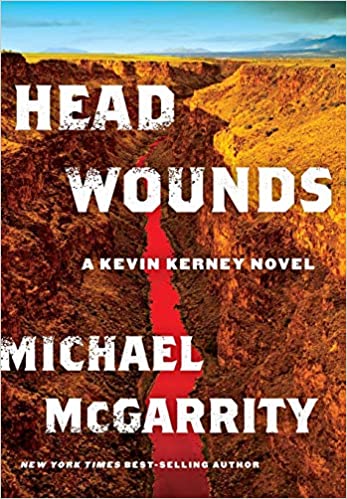 Head Wounds, by Michael McGarrity, is the 14th and reportedly last Kevin Kerney novel. Kerney, retired from his police chief job, is limited to a side role in this complicated and entertaining crime tale that stands on the shoulders of Kerney’s son, Doña Ana County Sheriff’s Office Detective Clayton Istee.

When two people, James Goggin and Lucy Nautzile, are found with their heads scalped and their throats cut in a Las Cruces motel room, Istee’s crime database searches fail to identify any homicides with a similar signature. But it doesn’t take long for Istee to discover that the victims were part of a tribal casino robbery that was never reported to the police.

The investigation follows a violent trail of murders before revealing a professional Mexican hit man named El Jefe, a bevy of corruption, mobsters, and other hired killers. For Istee, it becomes personal after he shoots El Jefe’s adopted son and finds himself as the assassin’s next target.

Head Wounds is a violent, at times over-plotted (with its crosses and double-crosses) crime thriller that is built on McGarrity’s vibrant painting of New Mexico. The villains are bad—El Jefe is uncannily omniscient and kills for the simplest of reasons—and the good guys, especially Istee, are dogged and fearless in their pursuit of justice.

The story moves with the speed of a roadrunner, which helps overcome the plotting excesses, making the overall effect entertaining and exhilarating as Clayton Istee and El Jefe chase each other across New Mexico’s enchanting and forbidding desert.