Books
The Man in the Microwave Oven 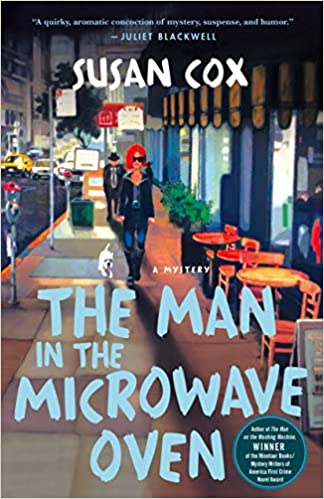 Theo Bogart fled England after a family tragedy, changed her name, and is now living in San Francisco, where she owns a specialty boutique and helps her friend Nat with his newly opened café. After hiding her true identity from everyone for more than a year, including from her significant other, Ben, she is terrified when another resident of her neighborhood threatens to tell everyone about her secret. But she’s not the only one who has reason to want the woman dead.

When Katrina Dermody is found murdered in her car, there is no shortage of suspects; and when more bodies start dropping, even Theo’s grandfather becomes a suspect in a case that grows to involve British spies, a foreign orphanage, backroom real estate deals, murdered priests, embezzlement, and more.

The strength of the story lies in its large cast of characters, a quirky bunch who live in San Francisco’s Fabian Gardens neighborhood, and who despite many differences of opinion, look out for one another. The city itself plays a major role, a fitting backdrop to a melting pot of individuals that include a reformed street kid, a homeless man, a freelance writer, a computer whiz, real estate moguls, and budding entrepreneurs among others. As Theo tries to keep her own secrets hidden, she uncovers more about the individuals around her—and the motives that drive them.

While the cast of characters is large, at the heart of the story is Theo’s desire to protect those she loves—and the life that she’s built in her new American city. If she can figure out the murders, with the help of this coterie of friends, she might even be able to avoid becoming the killer’s next victim.