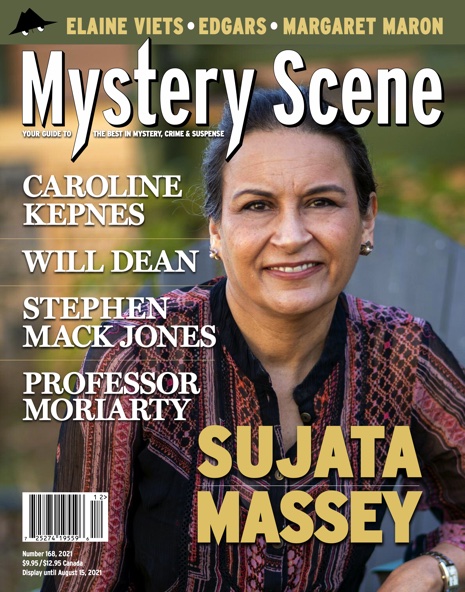 Everyone has their favorite Sherlock Holmes incarnation. That’s just a given among Mystery Scene readers. But how about your top Professor Moriarty? One of my favorites is Daniel Davis who matched wits with the crew of the Enterprise—including Data as Sherlock Holmes—in two popular episodes of Star Trek: The Next Generation. In this issue, Tom Mead looks at the many faces of Moriarty—including the real life villains who inspired Sir Arthur Conan Doyle to create his nefarious criminal mastermind.

There are many diverse new characters in crime fiction lately. One of the most intriguing is Sujata Massey’s Perveen Mistry, a female Parsi lawyer in 1920s India. Massey was able to draw on her family background for much of the research needed but she journeys to India on a regular basis to learn more. Oline Cogdill talks to Massey in this issue.

The son of an African American father and a Mexican American mother, Stephen Mack Jones’ August Snow is a bright new star in the mystery firmament. Snow is also a whistleblower: an ex-cop in Detroit who stood up against corruption within the DPD and won millions of dollars from the city in the subsequent court case. Now, Snow is engaged in some high-octane do-gooding—bad guys watch out! John B. Valeri chats with Jones in this issue.

Caroline Kepnes has added to the gallery of terrifying yet charismatic antiheroes with her protagonist Joe Goldberg. In his own way, Joe is a hopeless romantic—until the woman in his crosshairs turns out to be less than perfect. John B. Valeri interviews Kepnes.

Joseph Goodrich takes a look at the uniquely imaginative short stories of John Collier in this issue. I’m a fan of Collier’s quirky 1930 novel His Monkey Wife: or Married to a Chimp and had forgotten how many of his short stories deserve equal praise. Don’t miss out on this author.

Margaret Maron’s acclaimed North Carolina mysteries featuring Judge Deborah Knott are just part of her influential legacy. She’ll also be remembered for her key role in launching the Sisters in Crime organization and the helping hand she lent to many young writers over the years. Sadly, Maron passed away this February. Oline Cogdill celebrates Margaret’s life and career in this issue.

You might think of writing as an indoor occupation, but Will Dean is out there chopping trees and clearing ditches while coming up with his uniquely claustrophobic tales. Craig Sisterson tracks down the author to his Swedish forest lair in this interview.

In addition to the fiendishly clever crossword puzzle by Verna Suit, we have “Perilous Puzzles” in this issue by Maya Corrigan. Elaine Viets and Debbie De Louise offer interesting essays on their new books. Ben Welton takes a look at the influential academic mystery The Horizontal Manby by Helen Eustis.

And don’t overlook the Thrillerfest and Malice Domestic conventions this year, both of which are being presented online. If you had trouble getting to New York City or Washington, DC, in the past, then this is a great opportunity for you to see some terrific writers in your own home.